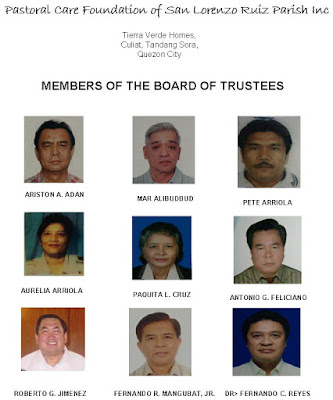 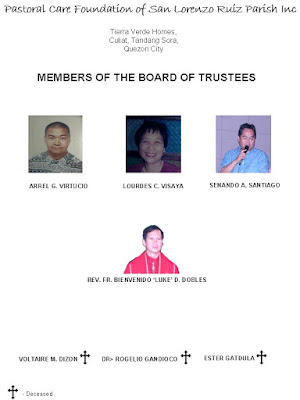 In 1994, during one of the traditional breakfasts with Father Rolly Petronio, along with some members of the Lay Ministers of the Eucharist, the idea of establishing a parish foundation was discussed when they noticed the much needed improvement of the parish priest’s living quarters – a project which required substantial funding. The need to establish a foundation was realized and in order to effectively coordinate fund-raising, an institution was legally established for the said purpose.

Mr. Conrado Pineda contributed his share by printing fifty booklets of provisional receipts for the foundation. Other parishioners provided the most needed encouragement.

The Foundation was incorporated on August 2, 1995 under SEC Registration Certificate No. AN095-02907. Aside from building the multi-purpose hall and convent, the foundation was likewise established to extend financial help to the evangelical, religious, educational, medical, socio-cultural, and youth programs of the San Lorenzo Ruiz Parish.

The foundation was formally launched on August 12, 1995 in a dinner pledging session at Sulu Hotel in Quezon City. During the session, the foundation received a total amount of Php550,000 in pledges.

After its formal launching, the foundation set a three-year timetable to raise funds for its intended projects. In the meantime, the Bureau of Internal Revenue authorized the Foundation to operate as a tax-exempt organization, subject to its review of operations after three years.

In 1996, the local chapter of Couples for Christ donated a secondhand Yanmar 25KV generator for the foundation. The generator was installed through the kindness of the Geraldez family and the Arriola family.

The foundation has given its financial share to the various projects of the Parish Pastoral Council, has shared in the parish operating expenses, and continues to do so in pursuant to its mandate.