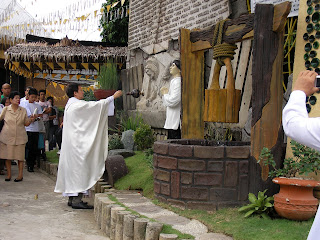 Two months after its original schedule, the new Shrine to San Lorenzo was finally blessed by Father Luke last Sunday, November 22, right before the 10AM Mass. The new shrine symbolizes San Lorenzo's martyrdom and his eventual elevation as a saint of the Catholic Church. In connection with the theme of this year's fiesta, the shrine is a testament to Lorenzo's generous spirit as a cheerful giver, his willingness to offer his life, even if he had a thousand of them.

Immediately after the blessing of the shrine, it was the parish convent, which was submerged during the floods of Typhoon Ondoy, that was also blessed after its rehabiliation was substantially completed.

We thank the Father for His continued blessing of our parish. Long live the parish of San Lorenzo Ruiz!