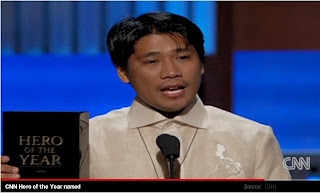 Efren Penaflorida, founder of the Dynamic Teen Company, which strives to educate underprivileged children especially those in the slum areas, won the CNN Hero of the Year Award for 2009. His efforts to change the lives of the marginalized children through his "pushcart classrooms" earned him the nod of most of the judges over nine others vying for the honor.

In his acceptance speech, his message to us all was that "Each person has a hidden hero within, you just have to look inside you and search it in your heart, and be the hero to the next one in need... Serve, serve well, serve others above yourself and be happy to serve. As I always tell my co-volunteers... you are the change that you dream as I am the change that I dream and collectively we are the change that this world needs to be."

The son of a tricycle driver father and a vendor mother, Efren grew up near the dumpsite of Cavite City where his vision of empowering the lowliest of children in the slums through his "kariton education" bore fruit, not from some out-of-this-world inspiration but according to him,from rocks. As a student, he was at the receiving end of the bullying that went on in his school and reached the point where they were thrown rocks at. Many of his schoolmates and friends ended up being bullied by gangs or even joining them. And that's what gave him the idea of setting up his own mobile "school-on-wheels". As they say, the rest is history.

Congratulations to Efren! A hero for our times! A Filipino!