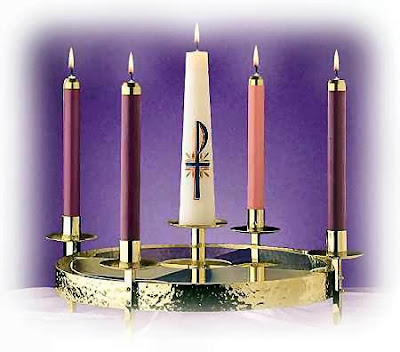 Advent, which comes from the Latin word adventus (in Greek parousia) for "arrival" or "coming," is a period of preparation for the birth of our Lord. Advent begins four Sundays before Christmas and is the start of the Christmas season, which lasts through the Baptism of Our Lord. The first Sunday of Advent also marks the beginning of the liturgical year, the Church's "New Year's Day," at which time we change the cycle of readings we are using at Mass.
Advent is a time of joyous anticipation, but also of penance and preparation for the great Christmas feast. The liturgical color of the season is purple, a sign of penance, which is also used during Lent. The Church discourages excessive ornamentation, boisterous music and even weddings during Advent, in order to foster a sense of quiet hope.
Who established Advent?
Thomas J. Talley, in The Origins of the Liturgical Year, sees the beginning of an advent season in the Fourth Canon of the Council of Saragosa in 380. In 567, the Synod of Tours established a December fast. And in 581 the Council of Macon ordered an advent fast for the laity from the Feast of St. Martin (November 11) to Christmas. This took the name of St. Martin's Lent.
In the seventh and eighth centuries, lectionaries (books containing the scriptural readings for the Liturgy of the Word) provided for six Sundays in Advent.
According to the Harper Collins Encyclopedia of Catholicism, Gregory the Great, who died in 604, was the real architect of the Roman Advent. Gregory fixed the season at four weeks and composed seasonal prayers and antiphons. Gaul (France) enriched the season with eschatological elements. And the fusion of the Roman and Gallican observances returned to Rome by the 12th century.
What is the Advent wreath?
The Advent wreath is one of our most popular Advent traditions. Its origin is in pre-Christian Germany and Scandinavia where the people gathered to celebrate the return of the sun after the winter solstice. The circular wreath made of evergreens with four candles interspersed represented the circle of the year and the life that endures through the winter. As the days grew longer, people lit candles to offer thanks to the "sun god" for the light. For us, the lighting of the Advent candles represents the promise of the coming of Jesus, the light of the world.
Traditionally there are three purple candles and one rose candle (for the third Sunday), but blue candles can also be used. Purple reminds us to turn our hearts toward God; rose is a color of joy.
Why is the rose-colored candle lit on the third Sunday of Advent?
The third Sunday of Advent is known as Gaudete Sunday because in Latin, the first words of the opening antiphon for that day’s Mass are "Gaudete in Domino semper" ("Rejoice in the Lord always"). On this Sunday rose-colored vestments are permitted and the rose-colored candle is lit as a reminder that we are called to rejoice.
Lifted from the American Catholic.org website
Posted by Web Admin at 3:15 PM