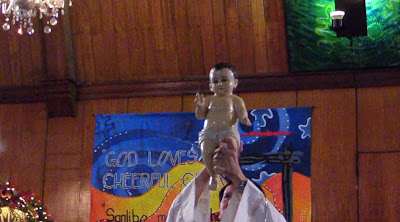 The coming of the Christ child is the culmination of all the preparation during Advent and the long sacrifice of nine days of Simbang Gabi. Unlike all previous celebrations of Christmas Eve, this year's event included a number of new things.

First was the ceremonial burning of the small pieces of paper, representing the wishes and desires of the parishioners for this Christmas, which started the eucharistic celebration. This is the first time this was done.

And then came the Panunuluyan. This year's Panunuluyan differed from the traditional re-enactment of the search for a place where Mary can give birth which was done the past years. This year's Panunuluyan was simple compared to previous years but still as solemn and meaningful. A representative each from almost all ministries and organizations in the parish formed two lines in the main aisle. During the part where the Gloria or Papuri was sung, the image of the baby Jesus was passed on to each representative starting from the church entrance until it was received by the PPC Coordinator, Kuya Toti who gave it to Father Luke who then raised the image of the child Jesus for one and all to adore. After the Papuri, the baby Jesus was placed in the manger.

After the communion service, a group from the Youth representing a number of ministries, performed a lights-out hand mime interpreation of the song Who Am I? popularized by the religious band called Casting Crowns. With all the performers wearing black costumes and white gloves, they mimed the song using their white gloves to form symbols, objects and words in bringing out the message of the song.

Towards the end of the mass, an audio-visual powerpoint presentation of the Ondoy calamity that affected the parish was played juxtaposed against the Community Night celebration in the beginning of December. It was a pictorial story showing how the parish, through its communitarian spirit, can rise up from disaster, overcome bitter adversities, and end up triumphant, with God's blessings and graces. This pictorial journey was set against the song You've Got A friend, popularized by the rock artist of the 70s, James Taylor.

So ends this Christmas journey for San Lorenzo, a journey of challenges and triumphs, much like the birth of Jesus some 2000 years past which heralded the triumph of good amidst all the evil in the world.