Day Camp for Confirmants: A Day to Remember! 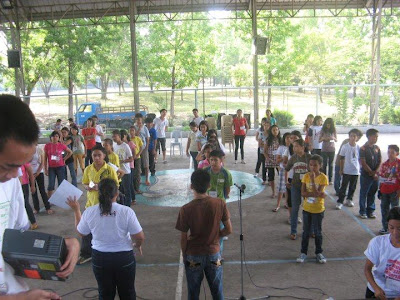 On June 1, 2010 a day camp was held for those confirmed last May 8. Forty of them walked from SLRP to the Servants of Charity House of Formation (Blessed Guanelle Center) in Philand. They were accompanied by the volunteer catechists, some sisters and novices from the Congregation of the Missionary Sisters of Mary Queen of the Apostles (SRA), volunteers from the Youth Ministry, and volunteers from the Diocese of Novaliches. Energized by the breakfast served by the organizers after the registration, the day started with an opening prayer through a song with animation. After the opening prayer, Fr. Dong from the Servants of Charity introduced the Center and its formation program.
Hosted by Ate Cora and Kuya Jeff Joves from the Vicariate of St. Peter, the program for the day led towards one goal: Getting to Know Themselves and their neighbor. The children were given dynamics to get to know each other and make them work together as a group or a team. In between activities, the facilitators and animators danced to the songs “Awit ng Kabataan” and “Humayo’t Ihayag”.
At mid-morning, Sister Merriam (SRA) gave a talk on Personhood. The talk ended just in time for the Lunch Dynamics which stirred up some of the participants. It was interesting to see how they interacted and related with each other especially in sharing what they had. During the reflection after the lunch dynamics, some of them expressed what they felt, and shared their realizations on the activity. Some burst into tears, some were very vocal. All tears and bad feelings however were washed away when the last Group Dynamics started. Cheering and laughter filled the open grounds of the Guanellian Center as the participants encouraged each other.
The day ended at around 4PM with a send-off Mass officiated by Fr. Luke Dobles. Although it was only held for one day, the campers had learned a lot, had lots of fun, and had found new friends. Indeed, it was a day worth remembering!