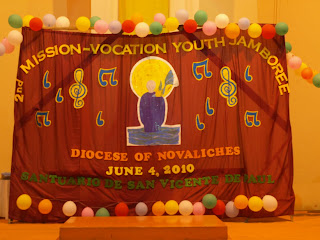 The Diocese of Novaliches held a Youth Jamboree at the Santuario de San Vicente Church from 6PM of June 4 to 6AM of June 5. The aim of the said event was to unify the catholic youth of our diocese, and to strengthen bonds between vicariates. Each parish in the diocese sent about 20 participants.

The event started with prayers and songs. The first half of the consisted of some lay persons who shared their experiences on how they started serving in the church and how they became better servants and better people after they got to know Jesus. This was interspersed with some musical numbers which included a hand mime by the Youth of Sto. Niño Parish.

A concelebrated mass followed at 1130 PM with Bishop Antonio Tobias presiding. This mass ended at 1 AM and there was a short snack after the mass after which the lighter side of the program followed -- presentations from the different youth and religious groups. The jamboree closed with a prayer in taize form, with each participant holding a lit candle. It was quite a sight to behold: hundreds of flickering candles and voices raised as one in thanksgiving for a fruitful evening.