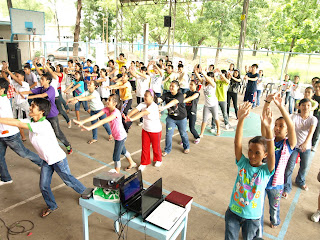 Last August 21, the 2010 Youth Camp of SLRP was held amidst a gloomy and overcast day. There were more than 60 participants, both from the parish and facilitators (faccies)from the Diocese of Novaliches and the parish of San Isidro Labrador who attended the one day affair. The camp began with the early morning trek from SLRP parish church to the camp ground at the Servants of Charity covered court in Centerville Subdivision, about two kilometers away.

Upon arrival, the participants were divided into small groups for the morning fun games (polvoron eating, amazing race) and teamworking activity (banner making). These served to put the youth at ease before the serious affairs later on. This took the first two hours of the morning after which breakfast of lugaw and juice was served the participants.

At about 9:30AM, the official Youth Camp began with the opening remarks of our parish priest, Fr. Luke and the inspirational message of PPC Chaircouple Kuya Cesar and Ate Mayette Tiongson. The rest of the morning was a chance for the youth groups to polish their cheers and present these to the body. The morning session ended with the announcement of the winners for the Best Banner and Best Cheer.
Nearing lunchtime, Kuya Al Yap, PYM adviser, gave his talk of encouragement for the participants. He mentioned the plans that were being lined up for the remainder of the year, particularly on the Youth Night for the coming fiesta celebration. This was followed after lunch by Kuya July, a member of the Diocesan Youth Ministry, who gave a talk on the plans and directions for the youth of the diocese.
In the afternoon, there were bonding activities spearheaded by the iLead teams from the vicariate and the diocese levels. Culminating the afternoon activities was the Holy Mass officiated by Fr. Luke. ending the formal session was the closing talk of Ate Mavic Montanez, another PYM adviser. Capping the event, all the participants, facilitators and organizers relaxed through singing songs of praise and dancing the night away with music provided by SLRP's own youth band, led by Kuya Mon Montanez.
Posted by Web Admin at 3:15 PM