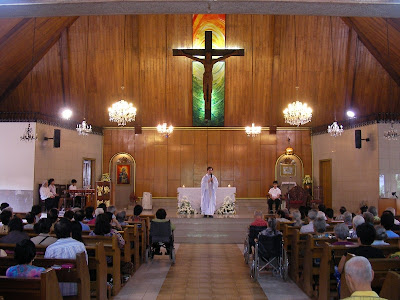 Last Sunday, January 9 was a very special day in the life of San Lorenzo Ruiz Parish. After more than two decades of existence, this is the first time that the octogenarians, fondly called the Octogens, were honored in a very special way by the parish. This was conceptualized by Father Luke and executed by the PPC and the Worship Ministry as a simple yet meaningful expression of thanksgiving to those 80-year olds and above for all the sacrifices, hardwork and contributions to making the parish what it is today.

The day began with a special 10:00am mass for the octogenarians. There was a special prayer for them and, in a departure from traditional practice, they were given communion in their reserved seats. After the mass, they were treated to a special merienda ( of pancit for a longer life) served by the altar servers, MBG and the SSDM. Ate Cora Pangyarihan, Ate Kate Geronimo, Kuya Nico Garcia and Kuya Anjo Santiago (on keyboards) serenaded the honorees with the songs the old folks were familiar with. They all went home with their individual souvenir of a mug containing a small San Lorenzo figurine and Enervon energy drink.

Long live the Octogens and may we see you in one of the parish's special activities in the future....a Centenarians' Day perhaps?