Tribute to Ruby and Beyond 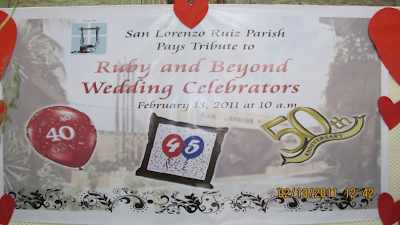 By : Cecile Lumba
February, known as the “Month of Hearts”, was indeed a perfect time as SLRP gave tribute to married couples of the parish who have celebrated forty years (Ruby) of married life and beyond.
Last February 13, 2011, a special mass was held honoring fifteen wonderful couples followed by a simple reception and program at the SLRP’s multi-purpose hall. They were treated to a nice buffet lunch and were serenaded by the CFC Choir which played the theme songs of these couples. The honorees were introduced and their secrets on how they were able to make their marriage last were revealed for all to learn from. They also reenacted their wedding day by signing the renewal of marriage vows followed by the ceremonial giving to each other a slice of the wedding cake. The day was remarkably a memorable one and ended with everyone in ecstatic mood. We salute these couples whose marriages had grown and deepened over time and have triumphantly overcome trials and hardships along the way.
At the same time, all married couples were blessed by Fr. Luke in all of the masses last Feb 12-13 and renewed their marriage vows in a simple ceremony.
This special event was spearheaded by Kuya Peter and Ate Lina Tamayo, Family Life Ministry Coordinators, with the support of the Community of Couples for Christ (CFC-FFL) which sponsored this event. The Pastoral Parish Council officers including the Ministry of Ushers and Greeters also contributed and extended their support to the success of the event. Being able to bring joy to the honorees gave us a sense of elation and delight and allowed us to give back glory to HIM who made all these possible.