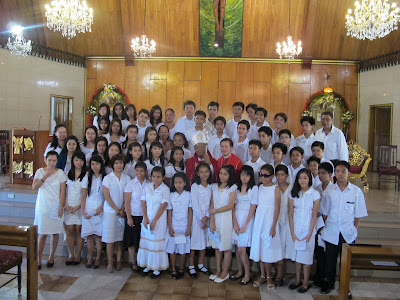 Pentecost Sunday was made more special for 52 young parishioners who underwent three consecutive Saturdays of intensive catechetical instructions in May. They all received the Sacrament of Confirmation from Bishop Antonio Tobias, affirming their Catholic faith and committing themselves to becoming soldiers in Christ’s mission to live and spread the Gospel.

As additional preparation, all candidates submitted themselves to the Sacrament of Confession the day before Confirmation while their parents and guardians spent the same morning for Recollection under the combined guidance of Sr. Pilar SRA, Sr. Salve, DM and Sr. Juliana, ASC with members of the Catechetical Ministry serving as workshop facilitators. The theme of the Recollection centered on the “the role of parents as shepherds of their own children” and the critical role they play in building their Christian faith. From questions raised in these workshops, the parents expressed their wish for further catechetical instructions on the Catholic faith. This was valuable learning point for the Ministry to include adult catechism classes in the coming school year.

The church was filled to the rafters, leaving hardly any seat available for other parishioners regularly attending the 10am Mass. Despite the big number of confirmants, the rites were generally orderly. As they were called to march down the aisle towards the altar, their ninongs and ninangs quickly stood side by side with their respective inaanak walking solemnly in procession towards Bishop Tobias who also gave a special dispensation to Fr. Luke to assist in administering the Sacrament. SLRP’s Grand Choir provided the liturgical music.

A simple buffet lunch was served for the Bishop by members of the Catechetical Ministry with assistance from members of the Mother Butler’s Guild and the Parish Pastoral Council.

The growing cadre of young adults being confirmed each year at SLRP is a testament to the Catechetical Ministry’s important role in helping spread the faith and grow its membership from among the residents of the surrounding community. This is a call for more members to join the Ministry to help actualize its mission: make each parishioner a catechist and help bring Christ to the community.