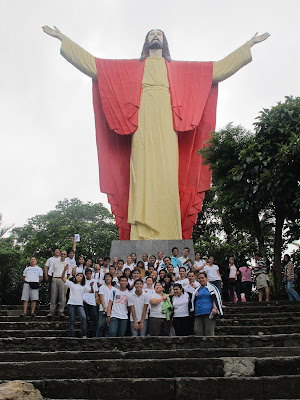 Barely a month before June 3, the youth of San Lorenzo busied themselves again for yet another tedious task — preparation for the recently held Youth Camp at Kamay ni Hesus in Lucban, Quezon. This included raising P30,000 for the projected expenses. Luckily for them, classes had not yet opened, so, almost everyday, groups of five or more trooped to parishioners’ houses to pick-up recyclables, sort them and sell them to raise some money. They also ventured into washing cars.
Weeks before the Formation and Youth Camp, I can honestly say that, being with these young men and women, they, who persevered under the heat of the sun and gathered recyclables while getting wet in the rain, had already started their formation. They were being formed, in more ways than one – through perseverance, hard work, cooperation, unity, the value of money, teamwork, responsibility and generosity. And all of these paid off! They raised more or less P8,000 — a big amount that helped meet the P30,000, aside from the donations and payments.
I am very proud of them because they persevered and they worked very hard. In the end they got their reward. With Father Luke opening the Youth Camp and blessing them as they travelled to and returned from Lucban, with the youth advisers who were our parents for the day, with the trekking up the 290-or-so steps to reach the summit of Kamay ni Hesus, to the multiplication of food that was more than enough for everyone, to the teambuilding activities at Batis Aramin Resort, it was the culmination of a beautiful summer formation for the youth. What better reward could anyone ask for?