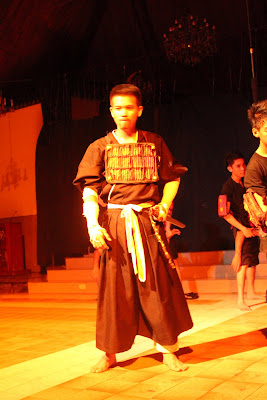 Another play was mounted by the Parish Youth Ministry for this year’s feast of San Lorenzo Ruiz. Entitled “Jomei at ang Lalaki sa Likod ng Liwanag”, the play presented the life and conversion of Jomei, the chief of the Samurai assigned to guard the martyrs—the Dominican friars together with San Lorenzo Ruiz.

Originally researched by Ate Lina Feliciano, the play lifts from her work the salient events in the life of Jomei directly surrounding his conversion after his encounter with San Lorenzo Ruiz.

At the heart of the play was the fortuitous crossing of paths between Jomei and the humble escribano from Binondo. As head of the Samurai guards, Jomei was given the big responsibility of converting the “heathens” to Shinto, the religion of Japan. But by the grace of God, Lorenzo’s steadfast faith had a troubling and lasting impact on his oppressor that eventually led to his conversion. Towards the end of his life, Jomei could be seen having frequent conversations with an unseen visitor, the man he says “is behind the light”. Their conversations were chronicled by Jomei’s granddaughter who turned these over to the proper religious authorities. These provided the documentary evidence of San Lorenzo’s “first miracle”. At the last hour of his life, Jomei called his granddaughter, asked her to pour water over his forehead symbolic of the rights of Christian baptism.

The PYM every effort to come up with a quality presentation in this their first “big budget” production. One saw from the sets, the costumes, the make-up, the sounds and the lighting, the creative efforts of the PYM to come up with a play they could really be proud of and which the audience appreciated. The actors and actresses too gave their best , particularly those who played the role of the samurai and tortured martyrs. The audience seemed to feel the punches, the kicks, the moans and groans as if they were there.

Through these weeks of preparation, from conceptualization to the night of their performance, the PYM showed how far they have grown as a ministry.
Posted by Web Admin at 7:11 AM