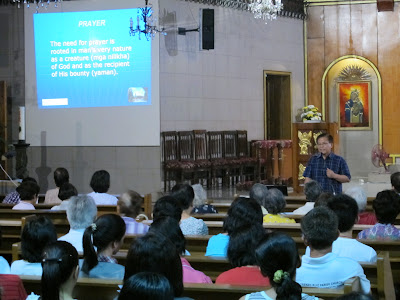 One thing that needs a lot of nurturing in a parish is the continued growth in the level of spirituality of its workers and parishioners.

A few months ago, Fr. Luke set up the Sprituality Formation Team (SFT) which is jointly headed by Kuya Toti Mangubat and Ate Lulu Visaya who, between them, have a wealth of experience in Catholic spirituality and revival. And so last Friday, November 18, the SFT began its pilot seminar with a talk on PRAYER. Ate Christy Vianzon led the opening prayer while Ate Leila Vicente introduced the main speaker for the talk. Both are also members of the SFT.

The first part of the seminar, handled by Kuya Toti, discussed PRAYER - what it is about, what the prerequisites are for a good prayer and the different kinds of prayer. He ended his talk by introducing ACTS, a suggested sequence in praying: A- Adoration, C- Contrition, T- Thanksgiving and S- Supplication.

The second part of the seminar, which was handled by Ate Lulu, revolved around the practical aspect of praying. In it, she discussed the ACTS and led the congregation through a prayer “exercise” where she demonstrated the proper sequence in praying. This was followed by silent meditation and adoration of the Blessed Sacrament . 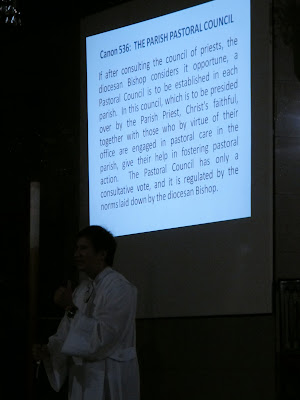 The last part of the seminar was a discussion by Fr. Luke on the role of the Parish Pastoral Council as the advisory arm of the Parish Priest, who is the designated representative of the bishop and given the responsibility for running the affairs of the parish.
Posted by Web Admin at 7:21 AM