On the evening of July 26, 8PM to be precise, the pickup truck carrying the image of Inang Desay, Mary, Untier of Knots, arrived at the parish. Spearheaded by our Parish Youth Ministry, led by Arriane Santos, and our Ministry of Altar Servers, led by Justin Callejo, they carried the image of our lady into the church entrance and into the welcoming parishioners, led by Fr. Rechie, our parish administrator.

A short procession followed immediately where the image, borne by Fr. Rechie, was carried to its resting place at the right side of the altar. The image was blessed, positioned on its pedestal, and incensed.

Fr. Rechie led the prayer ceremony. Arriane read the welcome prayer, after which the gospel was read and the prayers of the faithful was offered.  Six PYM representatives carried the novena articles (such as notepad, ballpens, the novena prayer and the pieces of string with knots) to be used by the parishioners before the altar which Fr. Rechie blessed. A 3-minute silent prayer for the intentions of the holy Father and the universal church, the diocese of Novaliches and the parish of SLR followed. 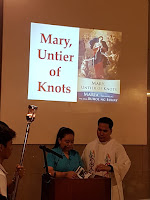 After the singing of the closing song to Mary, Arriane introduced the San Isidro Labrador Vicariate Youth Coordinator, Richard Bautista, who gave an overview of Mary, Untier of Knots. According to him, this devotion is being propagated in the Diocese specially for the Youth. It is the hope of Bp. Tobias that it will eventually spread the devotion to the entire diocese. Inang Desay, as she will be called, will have her place of honor at the Shrine of the Youth, the church of Kristong Hari in Commonwealth, when it is completed.

It was Pope Francis, then bishop of Buenos Aires, when he was in Germany, became a devotee of Mary, Untier of Knots (http://catholicstraightanswers.com/why-does-pope-francis-have-a-special-devotion-to-our-lady-undoer-of-knots/). When he returned to Argentina, he brought her image and propagated the devotion to her in his diocese. In similar manner, it is the same devotion that Bp. Tobias would like to propagate in the Diocese of Novaliches. 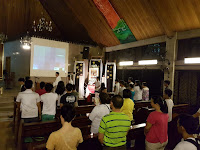 It is said that the Lady Undoer of Knots was in biblical reference to Mary, who through her obedience, undid the knot which Eve, through her disobedience, tied the knot of disgrace on the human race. (For a historical background to our Lady, pls follow this link: http://www.piercedhearts.org/hearts_jesus_mary/apparitions/untier_knots.html)

Our lady will stay with us for five days until July 30. So if you have time, you may visit her at our church and pray the novena from 3-8PM daily until Saturday when she leaves for her next parish visit.