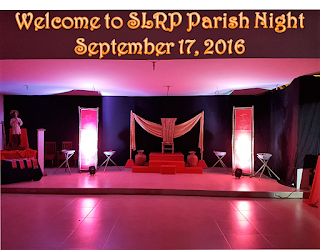 Parish Night 2016 was unlike previous occasions in the sense that this year's event was a throwback to the past, maybe way back to the past,  with its ethnic theme of "Katutubong Atin". Hatched a few months back, the PYM presented this theme to the PPC of holding an event that brought us back to the time of our ancestors, to the time of simple community living under the patriarchal rule of the  sultan or the datu. And that was what happened.

The whole evening began with the usual opening prayer and remarks led by Ate Heidi Temporal and Kuya Peter Tamayo, respectively. This was immediately followed by the opening dance number by the Parish Youth Ministry. coronation of the Munting Lakambini 2016 with an introduction by Kuya Cesar Tiongson, Head of the 2016 Munting Lakambini project. 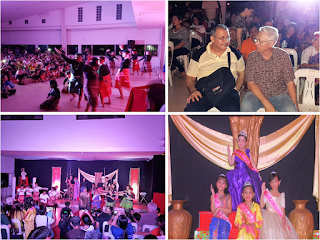 The Munting Lakambini coronation night was the culmination of a month-and-a-half long fund raising activity to help raise money for needed church repairs. It was a very successful project and the Munting Lakambini, Jaymie Paglinawan, together with her court, princesses Aina Supnet-Roque, Carlyn Ilaya and Angel Porras and the organizers, thanked with their little fashion show.

The program then proceeded with the performances by the different groups together with the religious in their much awaited numbers. Group 1 (composed of the MBG, AP and CFC) performed an Igorot dance. Group 2 (composed of the Music Ministry, PYM and SSDM) presented an ethnic tribal dance with a modern twist. Group 3 (composed of LECOM, KoC and Mass Media) performed a Castilian inspired La Jota de Moncadena. Group 4 (composed of LOM, BRC, Catmin and EMHC) presented a Muslim inspired number. The Religious, for their part, presented a dance adaptation of the conversion of the natives to Catholicism but instead of the Sto. Nino, they brought the image of San Lorenzo to the natives. 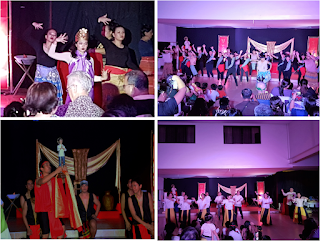 Interspersed with the dance numbers were raffle draws for one and all. The evening was capped by the closing message of Fr. Rechie Gier, who thanked everyone for coming and enjoined all to continue to build this Christ-centered community into a vibrant and lively parish bringing the message of sharing and caring for one and all.