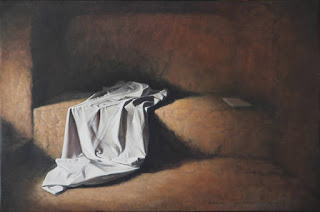 INTRODUCTION: People love to visit the graves and tombs of famous people like Magellan in San Agustin Church and the recent Archbishops of Manila, Rufino J. Card. Santos and Jaime L. Card. Sin, in the Crypt of the Manila Cathedral in Intramuros. There is a sense of peace and finality around graves. That is why we quietly pray and ponder at graves of famous persons. The least thing you expect in a grave is action and novelty as in the grave of Jesus!
Let us focus on this grave!
(1) Three women came to the tomb of Jesus that early Sunday dawn. They had oil with them to anoint Jesus and were planning to sit quietly beside the grave to revisit their memories of him. This grave was no ordinary grave! First, they noticed the cover stone has been rolled away. Though initially it looked like a grave robbery to desecrate the dead, it dawned on them that this is not a case of someone breaking in but more of breaking out. Instead, they saw a man in white robe who tells them that the Jesus they seek is not there but has been raised to life and went ahead of them to Galilee. Their shock is reported in Mk. 16: 8: “Then they went out and fled from the tomb, seized with trembling and bewilderment. They said nothing to anyone, for they were afraid.” The point the Gospel wants to make is that this grave is not the source of peace and rest and calm, thoughtful meditation but source of terror and upheaval. This grave is one of novelty so shocking that it frightens people out of their wits. To get that is to understand Christianity.
(2) From this grave of Jesus, we learn to our shock that everything we thought before about life, the world, and death is in fact not the case. The supposed laws of nature are in fact not laws after all. The Empty Tomb reminds us that God is the enemy of death and he has shown us his power over death in an unambiguous way. Then we ought not to fear death or be downhearted by the power of death. Some people think that to understand better the Resurrection, it is to be allegorized into the cause of Jesus. If that is so, his grave would be an ordinary grave. Note that historically no cult on Jesus’ Tomb ever developed in Christianity. They did not go there just to sit and mure on what life meant. Rather, they were surprised and tormented upside down.
(3) Just a word about the two men in white garment (sindone in Greek) at the grave of Jesus. To whom do they refer? To us Christians in our Baptismal Robe, announcing to the whole world from the Empty Tomb the good news of the Resurrection whereas the young man in white garment who was caught and fled leaving behind his garment also refers to us Christians in baptismal garb who leave behind his baptismal robe at the moment of truth and upheaval. The former refers to the call of every Baptized to Evangelization while the latter refers to the Christian who had left his faith at the moment of test!
CONCLUSION: Fellow Christians, spend a little time at the Empty Tomb of the Lord this Easter Week and listen to what that Tomb evokes in you! Happy Easter!
Most Rev. Antonio R. Tobias, DD
Bishop of Novaliches