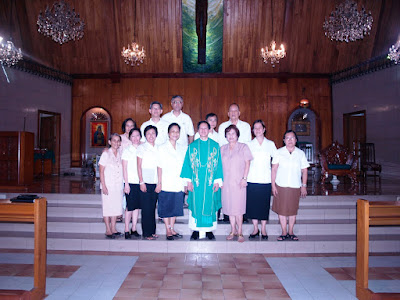 The vision of San Lorenzo Ruiz Parish (SLRP) is to establish small communities of Christians, communities rooted in families who gather around the Word of God and the Eucharist. United to the parish priest but ministered and collaborated by the laity, the members actively participate in the programs and activities held regularly in the parish. They are led to realize and experience the new way of “being church” – that of belonging to one big family, living like brothers and sisters, showing deep concern for both the material and spiritual needs of one another in their respective neighborhoods and knowing the members of each family by name.

The SLRP used to have 42 areas for Basic Ecclesial Community (BEC) implementation, having had an initial survey and area mapping made by appointed parish leaders. In 2002, the said areas were drastically reduced to only five, brought about by the subdivision of the Archdiocese of Manila and the creation of the new dioceses of Quezon City and Novaliches, which resulted in the new assignment of territorial boundaries between the latter two. SLRP used to be a part of Quezon City, but is now assigned to the Diocese of Novaliches. Thus, the original BEC orientation including its vision-mission statements, planning and evaluaton, as well as the mapping of areas were set aside and deemed inoperable.

In 2003, with the reorganization of the new areas of SLRP, BEC leaders and working committees undertook the task of forming new BEC programs, projects and activities. These include:

2004
1) Team building and bonding of parish leaders in Baguio, conducted by two invited facilitators
2) Area Mapping
3) Survey forms issued to and retrieved from the five areas
4) Street masses held every Saturday by areas
5) Pilot Area Testing – Cruz Compound with a religious sister and a lay leader as coordinators
6) Christmas Street Décor contest per area
7) “Caracol” street dancing annually on the parish fiesta day in all areas
8) Dawn Rosary procession sponsored by each area every first Saturday of the month which ends with the 6:00am Mass followed by “salusalo” or breakfast for all
9) Easter Egg Hunt for children coming from the areas

2005
1) “Lakbay-Aral” for the youth from the 5 areas at San Lorenzo Ruiz Parish in Binondo, Quirino Granstand and Breakwater in Luneta, Manila Cathedral and Wow Philippines Bazaar
2) Pilgrimage to Antipolo by foot
3) Film showing every Saturday evening of Lent
4) “Pabasa” on Holy Monday until Holy Wednesday
5) Seven Last Words on Good Friday
6) Weekly Bible sharing in each area

2006
1) Sportsfest for the youth, as well as adults, partcipated in by all areas
2) “Kumpisalang Bayan” held at Christmas and Lent
3) PREX classes conducted on a quarterly basis to date

2007
1) Continue and sustain aforecited activities
2) Review of PREX talks conducted by Father Luke as well as close monitoring of PREX classes
3) Reorganization of the PREX Secretariat for improved efficiency, effectiveness and interpersonal relationship to serve as venue for BEC implementation
4) Weekly bible reading and faith sharing conducted in a few BEC areas to gradually spread to all areas
5) General monthly prayer meetings planned for all areas at the parish level
6) Programs for empowering the laity through theological and pastoral formation at St. Vincent School of Theology in Tandang Sora Avenue, QC

Three parish leaders completed 14 sessions on basic Theology for Lay Leaders from August 2007 to March 2008 and three parish leaders attended 11 sessions in a BEC Organizing Skills Course from July 12 to December 13, 2008. The BEC continues to implement the said courses to bring in much needed life and vitality to the organization and to the parish.