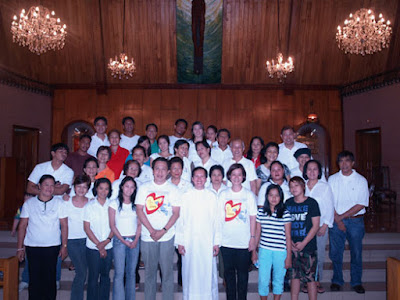 The Parish Renewal Experience (PREX) was introduced to the San Lorenzo Ruiz Parish (SLRP) by the PREX Secretariat of the Good Shepherd Parish of Fairview in July 1993. With the approval of Father Larry Toledo, Kuya Dante and Ate Baby Liban coordinated the first class at the Claret Formation Center in Tandang Sora Avenue. Four months after, PREX classes were conducted every month at the SLRP Hall. A couple of years later, when the group encountered difculty in getting candidates, the schedule changed and was held every other month. The Chairpersons during that time were Kuya Mar dela Torre and Kuya Dave Castro. The PREX family recognized the late Kuya Emer Visaya and his wife, Ate Lulu Visaya, as the pillars of the growth of the PREX family in SLRP since they were the ones who nurtured its formation and unity for eight years. They earned the endearing title as the Father and Mother of PREX in SLRP.

It was during Father Val de Vera’s time that the SLRP started its outreach program to two parishes: De La Paz Parish in Makati and Sta. Quiteria and St. Francis de Assisi Parish in Caloocan. The PREX Secretariat provided leaders’ formation and training of speakers and sharers, until they could independently conduct their own PREX weekends.

In August 2001, after PREX Class 63, Father Nelson Orquieta temporarily suspended PREX for the possible inclusion of the Basic Ecclesial Community (BEC) concepts in the talks. No seminars were conducted from September 2001 to November 2003. Father Pong del Rosario revived it in December 2003, a year after taking over as parish priest. In January 2006, he appointed Kuya Buddy and Ate Bing Lising as the new PREX Chair Couple.

Since 2007, the PREX Secretariat of SLRP has embarked on its role of evangelization through the integration and sharing of its resources in speakers, sharers and music ministry with other parishes like the San Isidro Labrador Parish in Philand Subdivision and the San Jose, Ang Tagapagtanggol Parish in Commonwealth Avenue. With the mindset to improve and update themselves for the common purpose of being effective evangelizers of the parish, the members of PREX willingly attended the Speakers and Music Ministry workshops conducted for the Diocese of Novaliches by the Christ the King Parish in coordination with the National Association of Parish Prex Secretariats (NAPPS).

In time for the feast of San Lorenzo, the 15th year anniversary and general reunion of all 2,348 PREX graduates from 85 classes was held on August 30, 2008 to ignite the fervor and zest needed for a more effective implementation of the BEC in the parish.

The able support, loving commitment, and guidance of SLRP Parish Priest and formator, Father Luke Dobles, has made evangelization through PREX become a passion and drive of PREX graduates to become effective evangelizers and make a difference in the lives of their families and the church.