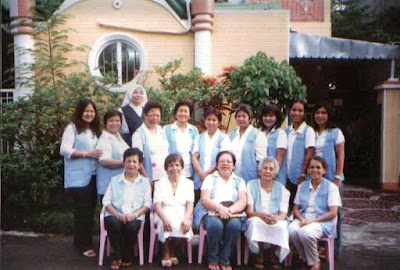 The San Lorenzo Ruiz Parish Block Rosary Crusade (BRC) is an organization comprised of groups of families living in the same community, united by the same fervor and devotion to Mama Mary leading them to our Lord Jesus Christ through the Mysteries of the Holy Rosary.

It all started in 1995, when Mrs. Lolit Franco, a Marian devotee, an active and concerned parishioner and a generous benefactor in SLRP, had observed that during those times, parishioners and neighbors seem to be strangers to each other. Moreover, she realized that there must be an organization which will support the catechists during that time, led by the Daughters of Mary Sisters, Sister Delia Mendonez, DM and Sister Mameng Miralo, DM.

With all the prayers and heavenly blessings, the BRC came about with Mrs. Lolit Franco as the first president. This made the BRC one of the most organized, most active, and most well-funded organization in the parish during that time. This was the First Phase of the BRC.

In the year 2002, there was a division of the diocese wherein the parishioners from Sanville and the nearby subdivisions across Tandang Sora were separated and assigned to the Diocese of Cubao, leaving SLRP on its own under the Diocese of Novaliches. This became the start of the Second Phase.

Today, with Ate Cora Bartolome as its president, the BRC carries out its mission of reaching out to as many families in the community to bring Jesus Christ to them through Mama Mary.
Posted by Team SBS at 5:45 PM