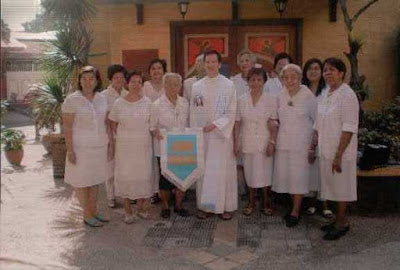 Established by the late Frank Duff in Dublin, Ireland, on September 7, 1921, the Legion of Mary (LOM) is an Association of Catholics sanctioned by the Church and under the powerful leadership of Mary Immaculate. Frank DufF, for whom a prayer for his beatification as the Servant of God, had for the Legion a twofold purpose — the spiritual development of the members and advancing the reign of Christ through Our Lady. Specifically, the general objectives of the Legion are to destroy the empire of sin, uproot its foundation, and promote the standard of Christ the King.

The history of the LOM in the Philippines traced its organization 65 years ago. Here in the San Lorenzo Ruiz Parish, this ministry was organized 19 years ago by Professor Lina Antonio. She was the first president of the Praesidium named “Mary, Mother of God”.

Legionary membership consists of active and auxiliary members. The former, at present numbering 15, are mainly retired professional career women. Their duty as such is to do apostolic substantial work in the parish. On the other hand, the auxiliaries, made up of different levels in the parish, has 21 members. They are unable to assume the duties of active membership. However, they are associates of the Legion because of their convicton that they are supplementing self-sacrifice and heroic services. In short, they are “prayer warriors” of the LOM. The one and most important requirement of a member of the LOM is the daily recital of
the prayers in the Tessera.

The apostolic work done by the current active members of the Legion of Mary in this parish are:
1) Home visitation for personal contact with families to show the church’s concern for them
2) Conducting of religious instruction classes and likewise preparation for first communion of children
3) Visit to the elderly women committed by their families in Credo, Inc., at Fairview, Quezon City, a private paying home, and the Golden Acres, a government institution of the Department of Social Welfare and Development for both elderly men and women who have been abandoned by their children and relatives and picked up in the streets located at Misamis Extension, Quezon City
4) Attendance at funeral wakes with mass and the rosary
5) Collaboration in the apostolic and missionary undertaking sponsored by the parish priest, specifically in assisting in the First Friday Mass at Culiat High School and at the Asia School of Arts and Sciences
6) Visitation to street children in their temporary home in “Bukid ng Kabataan”, General
Trias, Cavite, under the management of the Good Shepherd nuns
7) Pilgrimage to the Mountain of Salvation in Caleruaga, Batangas and in the churches in Laguna
8) Block rosary supervision over seven units in the parish
9) Family counseling
10) Assistance to senior citizens in their medical concerns
11) Organization of junior legionaries whose members are still on probation

San Lorenzo Ruiz Parish has notably a handful of legionaries as compared with other ministries. Perhaps the difficulty in the recruitment of members is attributed to the lack of knowledge and understanding of the objectives of the LOM and its dependency on financial resources of the members themselves. Solicitation, request for donations and fund-raising activities are taboo in the Legion of Mary.