Ministry of the Word 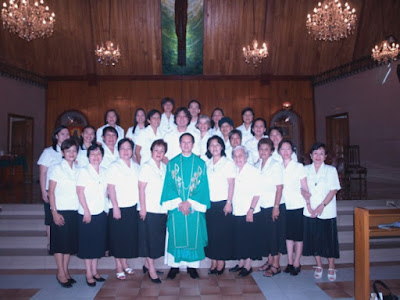 Initially called the Lectors’ Guild, the Ministry of Commentators and Lectors (COMLEC) came to existence even before the San Lorenzo Ruiz Parish was established. When the group was then informally organized, those who were tapped to serve during the mass were either referrals or known in the neighborhood to be good readers.

Through the years, the ministry focused on the members’ ongoing formation organized by the archdiocese, diocese, or parish, retreats, recollection, and COMLEC development programs, in order to shape its members to become better individuals and servants of the Lord. COMLEC has likewise played a major role in parish activities such as the Mutya ng San Lorenzo, SLRP Book
Fair and other fund-raising projects.

At present, the ministry continues to be involved in liturgical celebrations like the church and street masses, processions, confirmation and weddings. Those who are interested to serve as commentators and lectors need to undergo a screening process and are required to take part in the ongoing formation programs. With the reorganization of the PPC and its ministries, the COMLEC also adopted its new name Ministry of the Word last August 2009.