The Most Improbable of Saints 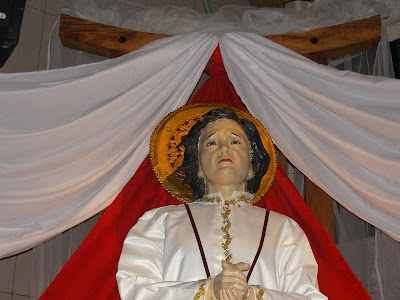 Binondo, Manila – Sometime in the year 1600, the home of a Chinese businessman and his Filipino wife were blessed with a baby boy. The exact date of the baby boy’s birth was unknown since many years later the baptismal records of the church of Binondo were destroyed. What can be considered true, however, was that it was a common practice during that period to give the child the name of the saint whose feast day the child was born on. And since that particular baby was born on the feast of Saint Lawrence, thus he was named Lorenzo.

Very little was known of Lorenzo’s childhood, except that his family were devout Catholics and that at an early age, he worked as a houseboy and sacristan for Dominican friars in Binondo church. As he grew up, he joined the Confraternity of the Holy Rosary and became a pious follower of the Blessed Virgin. Lorenzo received his education from the Dominicans who taught him how to read and write. His extraordinary talent for handling documents and calligraphy earned him the title of “escribano” from the Dominican friars as well as their trust in having Lorenzo transcribe baptismal, confirmation, and marriage documents into the church’s official books.

He was married to a Filipina and had two sons and a daughter. Not much is known about how he was as a family man, but he was an active parishioner who readily became involved with church activities. He was a fervent Marian devotee, especially towards the recitation of the Holy Rosary.

Life would have been easy for Lorenzo were it not for a certain incident that changed his fate in 1636. The exact details are unknown, but he was accused of murdering a Spaniard and was sought for questioning by the authorities. He sought assistance from his Dominican superiors in order to avoid persecution. And because the friars knew that the Spanish officials would treat Lorenzo’s case unjustly, they encouraged him to leave the country. Lorenzo was sent to join a missionary expedition to Macao along with several Dominican friars and a Japanese layman. There, Lorenzo hoped to start a new life, but little did he know that this expedition was headed straight for Japan, and that he would never see his family again. A much graver fate lay in store for the unlikely martyr.

The expedition went straight to Japan, where feudalism trampled over those of Christian faith. Those who were caught practising their Catholic faith were immediately persecuted. Although Lorenzo’s group had hoped to enter Japan unnoticed, the Japanese soldiers ventually found them and had them arrested for being identified as Christians. Lorenzo and his companions were taken for questioning by Japanese officials where they were repeatedly tormented until they renounced their faith. Buckets of water were forced into their mouths through a funnel until they could drink no more. Then, the soldiers would put a long board on their stomachs and repeatedly stepped on either side of the board to force the water out through all natural exits. The needle torture was even harsher. The captors would insert long needles under the nails of the prisoners and beat them repeatedly.

Two of Lorenzo’s companions, Father Gonzalez and Father Lazaro were interrogated first. During that time, Lorenzo was already having doubts whether he should renounce his faith or not, seeing how much suffering the two friars were going through. But seeing that the two would rather suffer the torment than give up their faith, this stiffened his resolve to stand for his beliefs. When his turn came and he was asked whether he would give up his faith, he firmly stated: “I am a Christan and I will profess this until my death. For God I shall give my life. Do with me as you please.” His response angered the judges who immediately had him tortured. But even as he suffered, Lorenzo refused to give up his faith.

Two days later, on the final judgment day, the judges had Lorenzo face them again and asked him their last question: “In return for your life, will you give up your faith?” Lorenzo’s response was immediate: “That I will never do. I am a Christian and I shall die for God. Even if I had a thousand lives, I would gladly give them all up for God. Do with me as you wish.”

Lorenzo and his companions were condemned to death and were taken to Nichizaka Hill to undergo their final torture. Each of them was hanged by the feet and dropped into a well filled with stones. Their temples were slit to let blood drip until they died from loss of oxygen or asphyxiation. Lorenzo died two days later on September 29, 1637. The soldiers then burned the bodies of the prisoners and tossed their ashes into the sea in order to prevent Christian veneration.

Three months later, news of their demise reached Philippine shores. Touched by their story, those who found out spread the word of his martyrdom and the martyrdom of his companions. On October 28, 1987, during his papal visit to Manila, Pope John Paul II had Lorenzo Ruiz beatified and later canonized. San Lorenzo Ruiz holds the honor of being the first Filipino saint, and the distinction of being the first saint beatified outside the Vatican. As Pope John Paul II described him, Lorenzo Ruiz truly was the most improbable of saints.

Though very little is known about his life, San Lorenzo Ruiz was truly a man of God. For a man to offer his life for God, this is truly the noblest thing anyone could ever do.
Posted by Team SBS at 12:00 AM