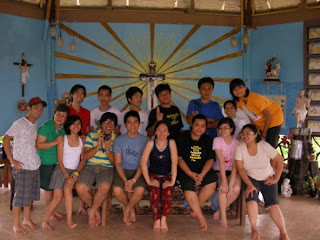 Last August 21 was a different day for us, the members of the Ministry of Mass Media, both for the old and new ones. It was a new day for the ministry and an exciting beginning for its members. It was the first spiritual formation and bonding activity for the newest ministry of the parish which was formed only last December 2007. Our destination was the Geronimo Farm Estates in Limay,

Meeting up at the SLRP multi purpose hall at eight in the morning, the day began with us praying the rosary and thanking God for being given this opportunity. After the prayer, it was time for us to pack up and, using three vehicles, we left for Bataan a little past 9 o'clock.

After three hours of travel, we arrived at the farm and were struck with awe as we saw a vast land filled with trees and plants, farm animals like turkeys and sheep, and a life-size giraffe made of cement. During our lunch, Nanay, the grandmother of Ate Kate who is a member of MMM, shared her stories about the farm. After lunch, there was a two-hour free time for unpacking and check-in. That completed, we headed to the fresh water pool for some refreshing swim and started getting to know each other.

Soon after we began the formal seminar. Ate Karen and Ate Josie led the group with two ice-breaker games where the members got to bond with each other and had fun outdoing each other to win. After settling down, it was time to listen to kuya Al’s talk on Evangelization and the Ministry. Then it was Ate Mavic's turn to talk about Communication where she had us do a group activity where we were asked to identify and discuss some communication problems we have experienced in our work in church. She instructed us to present our group's output and the learning points on how to deal with them. Then it was almost seven in the evening and time for dinner.

After dinner, the next activity was a film showing of a movie entitled Last Flight Out. It was follwed by our bonfire bonding time where we roasted marshmallows and hotdogs while others went for a night swim and still others just told stories, took pictures or played games late into the night.

On the second day, the members were energized as ate Karen and ate Josie started our day with exciting games that promoted team-building, communication and unity among the members. After breakfast, we all packed up and after a short talk by Nanay and kuya Al, we all headed back to .

It was a wonderful two-day learning for us but it had to end. We went home with lots of stories to share and new friends and new learnings acquired. We enjoyed the formation and as our faith grew more, we pray that our love and call to serve God will grow deeper.