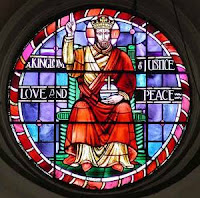 Brothers and Sisters in Christ,
The Lord Jesus is universal King because his Lordship is divine, eternal and omnipotent, therefore extending to all times, places and peoples. His Lordship is also of the truth, and all of those who share in his reign witness to the truth. Thus is fulfilled the eighth commandment, 'You shall not bear false witness against your neighbor.' (Ex 20:16; cf. Deut 5:20)
Jesus answered, 'My kingdom is not of this world; if my kingdom were of this world, my servants would fight, that I might not be handed over to the Jews; but my kingship is not from the world.' Pilate said to him, 'So you are a king?' Jesus answered, 'You say that I am a king. For this I was born, and for this I have come into the world, to bear witness to the truth. Every one who is of the truth hears my voice.' (Jn 18. 36-38)
Before Pilate, Christ proclaims that he has 'come into the world, to bear witness to the truth.' (Jn 18:37) The Christian is not to 'be ashamed then of testifying to our Lord.' (2 Tim 1:8) In situations that require witness to the faith, the Christian must profess it without equivocation, after the example of St. Paul before his judges. We must keep 'a clear conscience toward God and toward men. (Acts 24:16) (CCC 2471)