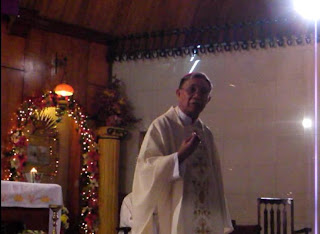 On the anticipated mass for the eighth day of the Christmas novena, Bishop Tobias was the main celebrant. He arrived early for mass and mingled with the parish leaders during dinner at the parish convent.

At 8PM, he led the parishioners in the celebration of the high mass. During his homily, the bishop enlgihtened the parishioners on the meaning of Christmas for us. He said that there are three comings of Christ. The first was two thousand years ago when the Savior was born in Bethlehem. The second will be the Lord's return at the end times. But according to Bishop Tobias, it is at this time, the third coming, that the true meaning of Christmas becomes a realization for all believers. It is this time when we accept Christ into our hearts as we prepare to celebrate the Lord's birth some 2000 years past.

Before the mass ended, Father Luke led the congregation in prayer for the continued spiritual guidance of the Bishop over his flock in the Diocese of Novaliches as the latter celebrated the 44th sacerdotal anniversary of his priesthood. After the mass the bishop received the wellwishes of his flock in San Lorenzo.