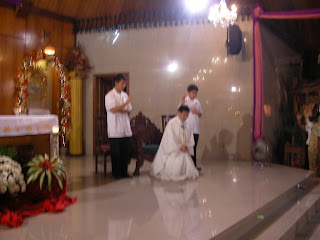 Last December 21, Father Luke celebrated his 52nd birthday. During the dawn mass, the parishioners, led by Ate Lulu Visaya, prayed for Father's good health and blessings. The parishioners also prayed for his continued consecration to the priesthood, for his unwavering and steadfast dedication to his vocation and for forgiveness for their shortcomings. In response, Father Luke thanked the parishioners of San Lorenzo for their continuing support for him and his ministry. He also sought forgiveness from the congregation for his failings and shortcomings. He prayed that the parish of San Lorenzo, in time, may be one.