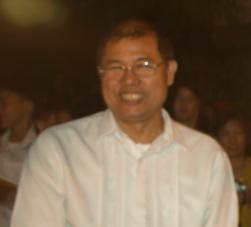 In its meeting last February 13, 2010, the Extraordinary Ministers of Holy Communion (EMHC) elected its new set of officers to lead the ministry. With the appointment of Kuya Cesar Tiongson as the new PPC Coordinator, he relinquished his post as Coordinator of the EMHC which he headed for a short four months. In his place, the members, in secret balloting, unanimously elected Kuya Ed Geronimo as its new coordinator. Together with Kuya Ed, the top four nominees with the highest votes automatically became the officers of the EMHC for at least the next two years. Elected new officers of the ministry were:

In accepting his new responsibility, Kuya Ed expressed his gratitude to the body for giving him and his co-officers their trust and confidence. He also mentioned that he will continue the programs which his predecessor began, focusing on formation and strengthening the bonds of the EMHC members. In closing he asked for the support of his co-lay ministers.
Posted by Web Admin at 9:18 PM