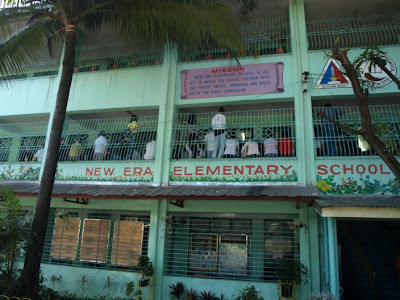 In the early morning of Saturday, February 6, 2010, Fr. Luke and some members of the PPC and SSDM trooped to New Era Elementary School in Barangay New Era to witness the mock elections. Representatives from the PPC arrived at the school a little after 7AM in time to meet with the PPCRV representative in charge of the mock election. The PPC members were accommodated inside the precinct where the "elections" were going to be held. The PPC members were allowed to check and inspect all the election paraphernalia, including the sample ballots, voters list, the PCOS machine, the backup battery and the general condition of the precinct.

At 10 minutes before 8AM, the precinct supervisor informed all those not authorized to leave the precinct in preparation for the start of the "election". All PPC members went out except Ate Heidi, who represented the PPC as observer in the election. By the time the clock ticked 8AM, all cameras were clicking and taping. Everyone had to jockey for vantage positions as observers outside the polling place. A little while later, the "voters" came in one by one, registering themselves, getting their ballots,filling them and finally feeding these into the PCOS machine. Two hours later, the mock election was closed and the vote counting began. In less than half-an-hour after the polling place closed, all the ballots were counted and Jose Rizal was declared thewinner of the presidential elections.

Overall, the mock election was fast, successful and peaceful....hopefully the real May 2010polls would be the same.