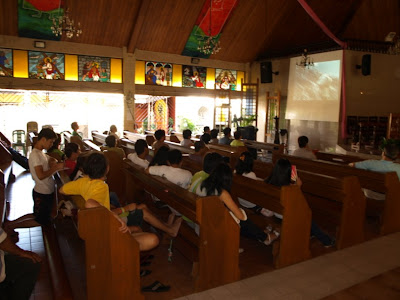 Last Saturday, the SLRP PPCRV conducted its first orientation meeting for volunteers for the coming May 2010 elections. Headed by Kuya Boy Temporal, the PPCRV Secretariat together with Fr. Luke Dobles, our parish priest, introduced the nuances of this new computerized elections to those volunteers who showed up. A short film showing on the history of Philippine election was presented as an opener before the orientation proper began.

Led by Kuya Peter Tamayo, the orientation began in earnest at around 2:30PM with the opening prayer which was immediately followed by the opening talk by Fr. Luke on the catechism of voting. For his part, Fr. Luke espoused the qualities of being honest, integrable and moral in the performance of the sacred right of qualified citizens, the right of suffrage or the right to choose his/her leaders. This was then followed by the orientation proper, which Kuya Boy Temporal handled. Here he discussed the legal framework for the elections, the process of voting under the computerized setup, the roles and responsibilities of voters and pollwatchers alike.

After the talk proper by Kuya Boy, it was time for the Question and Answer portion where the volunteers asked questions of the speakers. The questions revolved mainly on the specific roles and duties of volunteer workers on this special day. After the roles were clarified and expounded on, it was time for the volunteers to choose their preferences in assignments. Here they could choose whether they would like to be a poll watcher, work in the Voters' Assistance Desk, mobile support staff, logistics support and transport service providers.

For its first orientation, there was a modest 30 or so volunteers who showed up. It was not foreseen that many of the volunteers were from the Youth who either was in school studying or, for some, being asked to watch and observe the conduct of the elections.

The next orientation is tentatively set for sometime after the Holy Week. All in all it was a relatively good showing on the first of a series of learning experiences for the volunteers. We are calling on all parishioners, 18 and above, to get in touch with the parish office (Phone 932-6451), being involved and be counted.
Posted by Web Admin at 10:32 PM