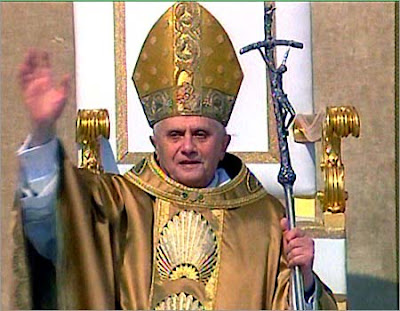 VATICAN CITY (CNS) -- Pope Benedict XVI marked the fifth anniversary of his election with a formal luncheon with 46 cardinals in Rome, thanking God and the cardinals for their help in carrying out his ministry.

"After five years, I can only say thank you, thank you especially to the Lord himself who guides me, but also to all of you," he said at the end of the luncheon April 19 in the frescoed Sala Ducale of the Apostolic Palace.

The Vatican did not publish the entire text of the pope's remarks.

The remarks were brief, off-the-cuff and "everyone has a right to some moments of privacy in life, even the pope," Jesuit Father Federico Lombardi, Vatican spokesman, told Catholic News Service.

Brief audio and video clips of the meal were distributed by the Vatican Television Center and included the pope's thanks to the College of Cardinals and to all Vatican staff members, who help him fulfill "the Lord's mandate to Peter to confirm the brothers in the faith, to proclaim his resurrection and to be witnesses of God's love."

In its report on the meal, the Vatican newspaper said the pope also cited the words of St. Augustine, who spoke of the church being on a pilgrimage through the tribulations of the world, supported and consoled by God.

"In that context, the pontiff accented the sins of the church, recalling that the church -- wounded and sinful -- still experiences the consolation of God," the newspaper, L'Osservatore Romano, reported.

The luncheon was hosted by Cardinal Angelo Sodano, dean of the College of Cardinals.

"We cannot forget the challenges that the modern world poses for each disciple of Christ, and even more for us pastors, but we always are strengthened by the light of Christian hope with the certainty that the Lord's grace continues to work in our midst," the cardinal told the pope.