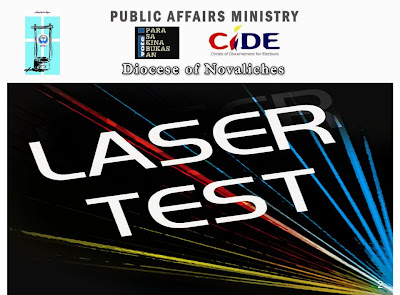 With the 2010 elections barely three weeks away, the PPCRV and the Diocese of Novaliches have joined forces to intensify voters’ education for the coming elections. Here in San Lorenzo Ruiz Parish, we have started conducting 5-minute educational talks for voters on their key role in the coming 2010 elections. First topic is the LASER Test,a short guide that lists out important attitudes and values of the candidates that we need to look out for. LASER stands for Lifestyle, Action, Supporters, Election Conduct and Reputation.

What is meant by lifestyle? Why do we need to give it our attention?

Lifestyle is defined as the way a person lives, particularly those of the candidates seeking our votes. Does he live a simple, people-oriented, God-directed life? Does he live within his means? Does he live a lavish lifestyle?

Does the candidate pay his taxes? If he is currently serving in government, does he file the correct Statement of Assets, Liabilities and Networth?


Action refers to the candidate’s capability and ability to accomplish things in an honest, responsible and transparent way. What has the candidate accomplished? Is there incontrovertible proof of his accomplishments? What has he done that benefited the Filipinos and the country? Did he do what he said he promise? Does the candidate have the credibility to follow through with his promises?

Election conduct is how the candidate and his supporters behave before, during and after the election. Does the candidate abide by the guidelines prescribed by the COMELEC, such as posting campaign posters? Is the candidate employing unfair campaign strategies, such as smear campaign, mudslinging and vote buying?

Does the candidate have a platform of government? Is it clear? Is it explained to the voters well? Are these reasonable and attainable?


Reputation is how people perceive the candidate to be. It is the constituents' collective perception of the candidate.

Simultaneous with the voters' education, the parish has also launched it Voters' Assistance Desk where parishioners can inquire on their precinct number for this coming election.

Next week the topic will be on the process of voting - how one goes about voting on election day, and the do's and don'ts for voters.