Sunday School Students Reach Out to the Disabled 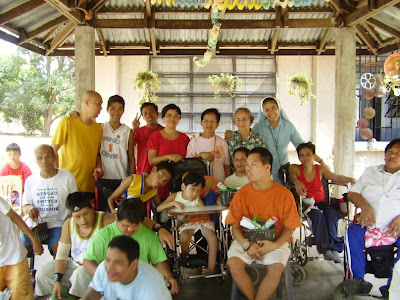 What a fitting way to end nine months of catechism classes!

Last March 27, students of the pre-confirmation class of SLRP’s Sunday School, ages 10-13, initiated among themselves an outreach project to spend a few hours with the 11 male residents afflicted with various disabilities under the care of the Servants of Charity. Their home in Centerville in Pasong Tamo is a wide expanse of grass and trees, with a handful of grazing sheep and goats, and a cluster of buildings housing the residents, a chapel, and a covered gym. Construction has just started on a new wing for more residents.

Organized just a couple of weeks prior to the end of classes, the students formed themselves into a committee chaired by Ian Yadao with just about everyone in the class joining as members of the food, entertainment, and a donor’s committee to solicit funds.

By 10 in the morning, the students trekked to the site, then took tricycles while the catechists rode in a pick-up carrying a cooler with frozen fruit drinks and packed lunch of spaghetti cooked by a student’s mother, and pastil, a Muslim meal of steamed rice and chopped chicken, adobo-style, wrapped in banana leaf. Banana was served as dessert. Funds came from the students and catechists, and donations solicited from family and friends.

Fr. Dong, the house director, gave a welcome talk explaining to the young students, the ministry of their congregation that focuses on caring for persons with disabilities, the poor and needy, abandoned children, and the aged. Immediately, a program of dancing and singing followed. To the visitors’ surprise, the residents had prepared an engaging program.

As soon as the mini-sound system was hooked up, several of them quickly whipped up dance numbers, ala Michael Jackson, clapping to the rhythm while laughter ensued from all corners of the gazebo. Of course, the young gentlemen would not pass up the chance to ask the female students to dance. The young girls shyly gave in to the request which for most was their ‘first dance.’ The students responded with a mellow group song, signalling the start of lunch.

Everyone ate heartily, a few residents needing assistance. To mark the day, each resident received a gift pack of toiletries and a T-shirt assembled by Ate Virgie. Soon it was nap time for the residents and both sides waved good-byes. Short but sweet! Reactions from the students ranged from “Masaya! Na-touch ako. ” to “Nakakahanga sila. Ang gagaling nilang sumayaw. ” It was truly a program befitting a pre-confirmation class. They learned to reach out.