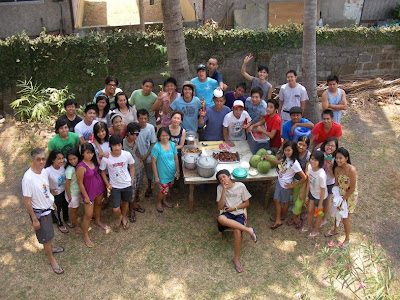 With over forty(40) members of the PYM and their adviser couples, the convoy of six vehicles left Manila at 4:30AM on a hot summer day on a journey of discovery. After a rather long trip, with lots of stops along the way, the group finally arrived in San Fabian towards noontime. A few days before the group had been divided into different teams, with each team assigned to take care of a particular meal, from the marketing to the cooking to the setting of the table and the cleaning up after.

While the first team assigned kitchen duties went about preparing lunch, the rest of the group unpacked and helped set up the place. Then Ate Karen set out the rules to be followed for the duration of the stay.

The afternoon was filled with teambuilding activities. After sundown, everyone settled down to watch "The Bucket List". The story revolved around two men, one a mechanic and the other the rich owner of the hospital they were confined in, trying to find fulfillment in their lives knowing they were only living on borrowed time. Thus, they prepared a bucket list of things they wanted to accomplish before they passed on. It was a heartwarming movie about priorities in life, friendships and relationships.

Day 2 began with breakfast followed by a talk by Ate Mavic on the Holy Mass. It was an apt topic for the youth as they need to be immersed in the central core of all parish workers' service - the Holy Mass. Ate Mavic discussed the different parts of the mass and their importance and meaning for all Catholics, especially for the youth who serve in various capacities in church, from altar servers to choir members to proclaimers of the word to projectionists. Ate Mavic emphasized in a big way that the mass is the apex of our belief and service, that every time we serve in the mass, we have to give it its due respect and reverence, from the way we dress to our behavior and proper decorum while attending mass.

She made everyone realize that since it was Jesus who is there present in the altar, and knowing it was Him, then we should give Him our full respect and attention. If we give so much importance to gold or silver, what more that it is the Lord present who is more precious than anything here on earth.

After the catechesis, Kuya Al shared with the group the results of a study made by the church on the realities of the youth in Catholic parishes (Source: National Study of Youth and Religion directed by Christian Smith and Melinda Lundquist Denton). According to this study, teenage youth have the smallest percentage of participation in church activities. This was attributed to a variety of reasons: non-involvement of parents in church activities, parishes not putting emphasis on youth formation, a drop in the number of Catholic schools, vague structure and organization of the youth.

With this as the take-off point, Kuya Al broke the kids into five(5) groups, with each group tackling one area that needed to be addressed based on the study. Each group discussed, brainstormed and suggested projects on the topics assigned to them.

The topics were: (1) Liturgy and Prayer, (2) Relationship Building and Socialization, (3) Formation, (4) Christian Service and Outreach, and (5) Budget, Facilities and Communication. The write-ups on the discussions will be taken up in the next meeting of the Youth in preparation for the Vision-Mission exercise that will follow.

After the closing prayer to end the group activity, everyone partook of a nourishing lunch of barbecue and nilaga before packing up and departing for home.

It was a preparation for the youth for their big task of working for a dynamic organization that will meet their needs and allow them to grow socially and spiritually as the "youth guarantees the future of the church." We thank God for allowing the youth this special time for formation,bonding and preparation for a deeper and meaningful service to God and the church.