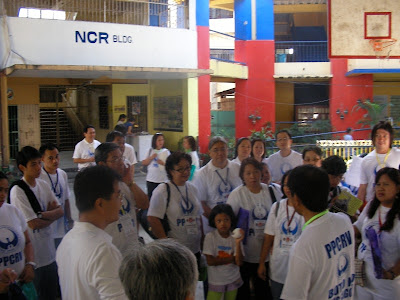 It was official! On the eve of election day, SLRP PPCRV began its official participation in the 2010 elections with its participation in the testing and sealing of the PCOS machines at Culiat High School last May 9, barely a day before the election began. As the volunteers gathered at the church grounds at 7:30AM, the PPCRV Secretariat got a pleasant surprise when more volunteers heeded request for participants in the testing. Just before 8 o'clock, Fr. Luke gave his blessings to all volunteers prior to their departure.

Upon arrival at the Culiat High School, the PPCRV volunteers first stop was the office of the Principal for a courtesy call and to get their marching orders. There was a concern early that day that the testing might not push through when the volunteers were informed by the principal that there were two compact flash cards with labels showing missing precinct numbers. After consultation with COMELEC, the go signal was given to proceed.

Then it was off to the individual precincts for the actual testing. As each PCOS machine was brought out of the principal's office, the corresponding PPCRV volunteer team followed the BEI officers for the actual testing. After a cautious start, the testing began in earnest and by noontime, most of the PCOS machines were tested, sealed and repacked for election day. Except for the sole PCOS machine deployed in Room #4 where testing did not happen at all that day as the machine was defective. As lunchtime arrived and with the Smartmatic technicians still unable to determine the actual problem, tensions began to rise. At 3PM, the technicians brought the compact flash to one of the PCOS machines in nearby Culiat Elementary School for testing and found it working. It was then determined that it was the PCOS machine that was defective. It was then determined that testing will have to be postponed until a replacement machine will be delivered. (After a third replacement on election day, electronic voting in Room #4 happened towards lunchtime on election day.)

All in all it was a new experience for all volunteers, more so for those who had already experienced the manual procedures of elections past.