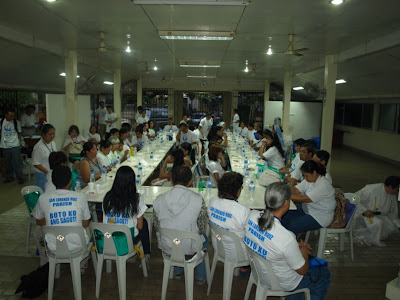 Finally, it was over! All the hard work paid off. The countless hours of meetings in our parish, the hours spent attending all those seminars in our diocese, the mock elections, the frenzied preparation, the voters’ education at mass, the orientation of the volunteers - all these bore fruit.

They responded to the call of our parish, 96 of them, with ages ranging from 15 to over-60. They were students, out-of-school youth, working professionals, retirees, religious, single, married, widows and widowers. Some came alone, others came as a family. Some stayed in the background, quietly but fervently at prayer. They were diverse in their political beliefs and economic background but one in their cause – to make a difference in the first automated elections held last May 10. Armed with nothing but their sincere desire to make Elections 2010 in Culiat High School peaceful, orderly and honest, they showed up very early on that Monday morning at the SLRP multi-purpose hall. There they were given their “war tools”: pen, notebooks, alcohol, some tissue paper. After a simple breakfast, communion and a blessing from Fr. Luke, they were on their way. They arrived at Culiat High School at 6am, an hour before doors opened, and went straight to their stations which was already set up by the advance party of the Logistics team. Poll watchers went to their precincts, the voters’ assistants to the Voters’ Assistance Desk, the food brigade to their stations and the logistics team in their proper places.

The PPCRV secretariat was the roving marshals. Teams had been divided into shifts, 4 shifts for the entire day, but no volunteer followed this order. They all stayed at their posts, together, until the end. They were warned that tempers would fly, and that there could be confusion and chaos especially since this was a first in the history of Philippine elections. Indeed it happened as they were warned. But they were prepared. They addressed irate voters with courtesy and patience, informed the elderly, the persons with disabilities and the pregnant women that they had a lane especially for them and even accompanied them. The voters came in waves and after the initial shock the volunteers rallied and found their own rhythm. Voters who tried to pull their weight were referred to the secretariat who respectfully but firmly told them they had to wait for their turn. A few left in a huff but the majority, seeing that everybody was treated with the same courtesy no matter his station, stayed and waited, even if it took several hours.

They stayed until closing time at 7pm except for the poll watchers and the secretariat who stayed until the end of the canvassing, at 2am of May 11. They were bedraggled, they were hungry, they were exhausted. They were happy. They were the San Lorenzo Ruiz Parish PPCRV Volunteers and this was COMMUNITY.

A pat on the back to the PPCRV chair-couple, Kuya Boy and Ate Heidi Temporal, to the PPC chair-couple Kuya Cesar and Ate Mayette Tiongson, Fr. Luke and all the volunteers for a job very well done! Bring on the next elections!