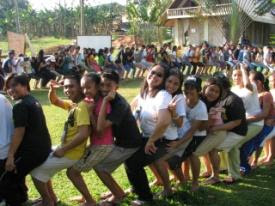 Four youths from SLRP – Cora Pangyarihan, Jenny Ragua, Arlene Trinidad and Jet Yap joined other youths from the other parishes of the Diocese of Novaliches in a three-day camp at the Oasis of Prayer Retreat House in Silang, Cavite last May 21. We departed at around 9AM and arrived at 1PM. Once there, we were reminded of the house rules and were assigned our cabins which would be our home for the next three days. Given just enough time to rest and unpack our things, we headed straight to the Pavilion where Fr. Lando Jaluag gave us an overview of the program and introduced us to the Training Committee. The rest of the day was filled with “Getting To Know You” activities and composing cheer songs to be presented later that evening. After an early dinner, we were given time to freshen up and rehearse for the cheering competition. The evening was full of energy, as the 10 groups presented what they had rehearsed just a few hours earlier. After the two-hour cheering competition, we headed to the open grounds for the Bonfire/Passion Talk. We we honored by the presence of Mr. Bon Manalaysay, the founder of the Dynamic Teen Company and mentor of Efren Penaflorida, the 2009 CNN Hero of the Year Awardee. Mr. Manalaysay brought two of his students who shared their life experiences and struggles before finding a bright future with the Dynamic Teen Company. The first day ended at 12MN with reflection and taize.
Day 2 was again packed with activities. Even lunch was an execise in selflessness. After lunch, the body was again divided into groups and buckled down to work on some serious topics: mobilization, spiritual formation, social entrepreneurship, volunteer management and project management. In the evening Bro. Zandro Villanueva took over. He had everyone doubled over in laughter but he also successfully brought across realizations in leadership. This was followed by the washing of the feet where we relived the time Jesus washed the feet of his disciples, symbolic of a leader being first of all a servant. Day 2 ended with everyone showcasing his/her talent at Talent Night.
Our opening prayer for the day was unique and interesting on the third day. It paved the way for the activities scheduled for that day. We had a mass later in the afternoon. Our three-day stay ended with a camp thanksgiving and burning of our letters to God. We departed Silang at 9PM and arrived at St. Peter’s at 12MN. We achieved the goals laid out for us at the camp: to be sevants first in order to lead.
Posted by Web Admin at 11:17 AM