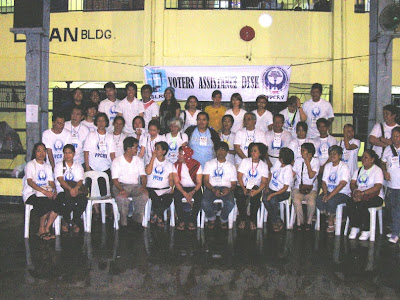 Barely able to rest after the last poll duty in May of this year, the PPCRV was again called to service as the citizens' arm in the just concluded Synchronized Barangay and Sangguniang Kabataan Elections last October 25, 2010. Armed with its hopeful desire for positive political change and its objective determination for a clean and peaceful elections, some 50 or so volunteers gathered at the parish hall before sunrise to, once again, perform their volunteer duty. After the communion service for the volunteers and a hearty breakfast of adobo rice and egg, the volunteers were given their final briefing and precinct assignments just as the first rays of the sun brought in the new day. By quarter of six, the volunteers proceeded to the Culiat High School for active duty.

Upon arrival, the Volunteers Assistance Desk (VAD) was set up with the voters' lists, laptops and precinct directories made ready for the arrival of the electorate. After the courtesy call on the High School Principal, it was time for the Pollwatchers to proceed to their respective precincts to await the formal start of the election.

Soon as the bell sounded at 7 o'clock, the VAD went on full gear as it took on the early morning rush of voters. There were some confusion among the voters as some of them thought they were to vote in the same rooms they voted in during the national elections last May. For some this was so but for many there was a change of classroom. Majority of the voters came during the early morning but was not sustained. By mid-morning there was just the trickle of voters until the close of elections at 3:00PM. Overall, the conduct of the election was peaceful and orderly. Except for isolated cases of voter identity verification, missing voters' names, duplicate voter's name, the voting was generally successful. The voter turnout, at probably less than 30%, was quite low.

To all PPCRV Volunteers, congratulations on another job well done! May our tribe increase and spread to more parishioners. Until the next assignment, you all deserve a pat on the back and a celebration!
For this local election, the PPCRV set up its own unofficial computerized tally count. Soon as the canvassing began and the precinct count underway, the PPCRV did its own parallel canvassing. As each precinct completed its count, the assigned PPCRV pollwatcher got a copy of the voting results and forwarded it to the VAD where a computerized tally count was done. By 10:30PM, the last of the 60 or so precincts' results was entered and the unofficial election result immediately obtained. Here are the unofficial results of the PPCRV count: