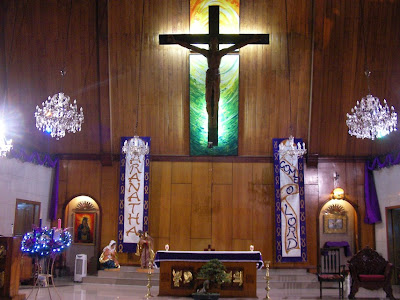 SLRP marked the new liturgical year last November 27 with the theme Maranatha (Come O Lord). It was also in a simple ceremony during the mass that the advent wreath was blessed and the first candle was lighted to mark the beginning of the four weeks of preparation for the coming of our Lord. With the season of Advent, the Church begins the liturgical year with the end in mind where Christ our King rules over all with justice, peace and harmony.
Maranatha (either מרנא תא; maranâ' thâ' or מרן אתא; maran 'athâ' ) is an Aramaic phrase occurring once only in the New Testament (see Aramaic of Jesus) and also in the Didache which is part of the Apostolic Fathers' collection. It is transliterated into Greek letters rather than translated, and is found at the end of Paul's First Epistle to the Corinthians (1 Cor 16:22) . The NRSV translates it as: "Our Lord, come!" but notes that it could also be translated as: "Our Lord has come"; the NIV translates: "Come, O Lord"; the NAB notes:

"As understood here ("O Lord, come!"), it is a prayer for the early return of Christ. If the Aramaic words are divided differently (Maran atha, "Our Lord has come"), it becomes a credal declaration. The former interpretation is supported by what appears to be a Greek equivalent of this acclamation in Rev 22:20 "Amen. Come, Lord Jesus!""
Taken From Wikipedia