Lenten Area Way of the Cross 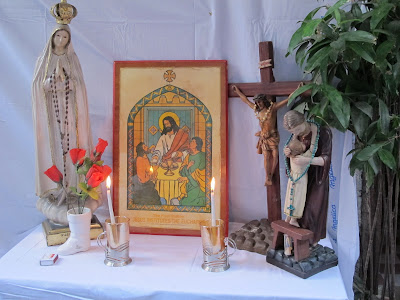 In SLRP, the celebration of Lent began with the yearly Area Way of the Cross on March 12, the first Saturday immediately following Ash Wednesday. It is the parish's way of inviting all parishioners to participate in this season of sacrifice and prayer. Fourteen homes in Cruz Compound and Dona Faustina Village 1 were chosen to host each of the 14 stations in a symbolic re-enactment of Jesus passion, death and resurrection. In each station, there are prayers recited and a short narrative of the particular station is read to the congregation and after which Fr. Luke blesses the people. The parishioners journeyed on to the next station until all fourteen stations were visited. The Area Way of the Cross ends with the celebration of the Holy Mass followed by simple fellowship.
This continues on every Saturday of Lent as it is repeated in the other areas of the parish. The following areas followed after: St Dominic 4 last March 19 and UP Professors Subd last March 26. On April 2, it will be Tierra Verde 1 & 2 and finally, it will be the Friends of Sanlo's turn on April 16.