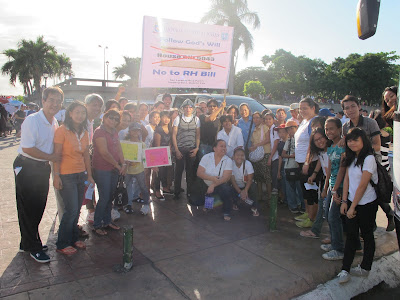 Following the call of the Catholic Church to show solidarity amongst the faithful in sending a strong message opposing the proposed RH Bill, a 50-man delegation from SLRP joined thousands of other Catholics in a rally held last March 25 at the Luneta.

Led by Father Luke and the SSDM, the parish was well represented, with both the young and old, the lay and the religious, officers and workers joining the rally. The delegation left the parish in the early afternoon of March 25 and arrived at the Luneta well ahead of the start of the official activities at 4PM. The group found their place among the many delegations that went to the rally. They settled themselves amongst crowd, rested, took some photos and mingled with the other participants but most importantly, they added their voices to the growing clamor to repudiate the RH Bill. It was a day of unity as the people expressed their voices in upholding life and saying no to the RH Bill. The rally ended with the Holy Mass officiated by the good cardinal of Manila, Gaudencio Rosales.