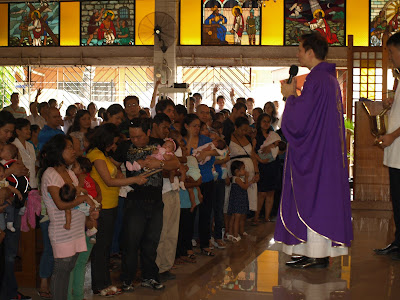 Amidst the noise of the world, one small voice yearns to be heard. It is a choice many easily shut out and very often taken for granted. It is the voice of life, the voice that some do not wish to hear.

Last March 12, a special mass was celebrated in honor of babies less than a year old, expectant mothers and childless couples who want to have children of their own. This was organized by the members of the Lectors and Commentators (LECOM) Ministry.

Prior to the mass, a video clip was shown on the importance of life and how babies are cruelly aborted. One could also see how many teen pregnancies occur, how many babies were aborted, and how the RH bill, if approved, may affect the country.

The special “guests” for this occasion( which included babies less than a year old, expectant mothers, and couples hoping to have babies) had their pictures taken in front of the church under a make-shift photo booth. A video presentation giving tribute to life was also played thanking parents who made the right choice and had that tiny voice of life be heard. Afterwards, Father Luke blessed the “special guests” and each was given a token of appreciation.

It was a wonderful sight to behold these people, proudly standing in front of the congregation as living testimonies to life – the babies with their mothers, the expectant women, and the couples eagerly awaiting one to call their own. They have made their choice and allowed that little voice to be heard.

As Father Luke had mentioned during the mass: “Aren’t we glad that our mothers gave birth to us?”