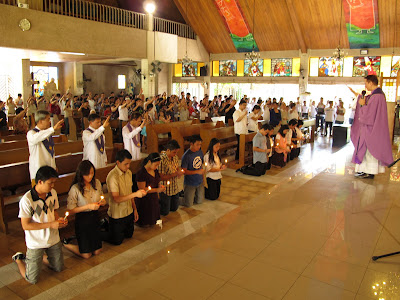 This year, Father Luke, together with the PPC, started a tradition of paying tribute to special people on the second Sunday of each month. For the month of April, SLRP paid tribute to the graduates of S.Y. 2010-11, including those who passed the Board/Bar Exams as well as those who got their post-graduate degrees.

A special mass was held last April 10 specially to honor these graduates. It began with the traditional march of the graduates five minutes before the Mass as each of the thirteen college graduates and board passers lined up to be presented to the congregation one by one. Proud parents, friends, and fellow parishioners applauded these achievers as their names were called.

Before the Mass ended, they were again presented as they held their lighted candles and stood before the altar. Father Luke, together with the parishioners, prayed over them and wished them well on their new journey in life. With the Grand Choir sharing their God-given talents, who wouldn't feel special that particular day! After the mass, pictures were taken beside the life-sized standee of a graduate at the church entrance.

The celebration did not end there. The SLRP Youth, the program organizers for this special tribute, led the graduates to the Multipurpose Hall for a light snack and a Career Development Talk by our special guest Mr. Arnold David, a veteran Human Resource speaker, who discussed the job market and gave the graduates some good advice and tips. The program ended with tokens for everyone and a new outlook for the graduates as a new chapter in their journey begins.