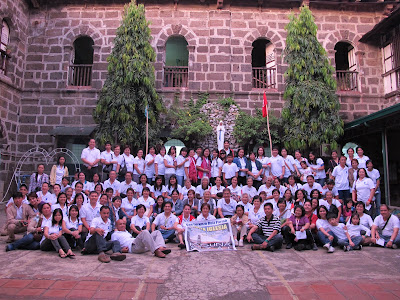 
What better way to prepare for the Lenten season than to go on a Lenten Pilgrimage. This is exactly what Fr. Luke Dobles had in mind when he initiated plans for a Visita Iglesia with the objective of instilling a spirit of prayer and penance during this Lenten season as well as promoting oneness among the members of the SLRP community. It would be the first time that the parish would embark on a big activity like this one.

The plan was set in motion in the February 2011 PPC meeting and with the full support of the Parish Pastoral Council, the Extraordinary Ministers of Holy Communion was tasked to spearhead the activity. The Visita Iglesia was then scheduled on Saturday, April 9, 2011 and the itinerary was identified – Our Lady of the Pillar in Alaminos, Cathedral of St. Paul the Hermit in San Pablo City, Church of San Bartolome Apostol in Nagcarlan, Church of St. John the Baptist in Liliw, St. Maria Magdalena Parish in Magdalena, Church of San Pedro de Alcantara in Pakil, all in Laguna, and the Church of San Ildefonso in Tanay, Rizal. Also included in the itinerary was the Nagcarlan Underground Cemetery, the one and only underground cemetery in the Philippines.

One hundred forty-seven participants – of varying age groups, parishioners and pastoral workers alike and even guests from other parishes – joined and were accommodated in three tourist buses. Before departure, Fr. Luke boarded each bus and gave his blessing. On the bus, the trip started with the community praying of the Holy Rosary. A video show of all the church destinations and a short background or history of the churches and their patron saints was presented as an introduction to the places to be visited. To break the monotony of the long travel, there were games and prizes for all, and lots of bonding as well.

The main activities in the churches started with a mass at Our Lady of the Pillar in Alaminos, Laguna and the Community Way of the Cross with the 14 stations divided among the seven churches. Participants also spent some time with their own personal prayer and adoration. The church of St. John the Baptist in Liliw, Laguna graciously offered the use of their auditorium space where the group could take lunch. A photo session was allowed at every stop to record each visit.

It was not only a time of prayer but also a time to appreciate the beauty and antiquity of churches built during the Spanish period. One will note the different styles of architecture and the influence of the Franciscan and Augustinian friars in the design of the structures. Through time, these churches had undergone reconstructions and renovations but were still able to retain their original identity. One will also marvel at the exterior of the churches with façades made either of sand, stone, brick or adobe blocks; the retablos at the altar with their ornate designs; the church pulpit which was a common feature inside the churches and where the priests used to deliver their sermons, and the tall bell towers. Notable was the relic of Our Lady of Turumba in Pakil, the bloodstains of our revolutionary hero Emilio Jacinto in Magdalena, the San Ildefonso Church, the second oldest church in Tanay and already considered a National Cultural Treasure in the Colonial Churches category with its finely carved 200-year old Stations of the Cross, the underground cemetery and its niches where Spanish priests and high officials were buried and which served as a hideout for our revolutionary patriots.

To be able to manage a big group and to visit several places in a span of 15 hours was indeed a feat. Even Fr. Luke made sure that he was able to be with everyone as he hopped from one bus to another. And despite the unforeseen delays caused by traffic, accidents along the way, overlap with other visiting groups, weather changes, everything proceeded smoothly with the flexibility and adjustments made to strictly adhere to the time table originally planned. Everyone was safely home in SLRP as scheduled.

Here are some feedback and comments from some of the participants:

From what I have observed, the Visita Iglesia was a success. As for me, I felt closer to God. I also saw that for everyone this occasion served its purpose for the Lenten season. - Ate Sol Adre, MBG

It was a nice and wonderful experience seeing the Spanish Churches. - Mrs. Danielle Languido, CFC

The Visita Iglesia held last April 9, 2011 was a very fulfilling experience for our family. It was our first time as a family to join a parish activity like this one, and we enjoyed it very much. It was a very well planned activity and the outcome was very systematic and well organized. We also witnessed and experienced as how united the parishioners were. A successful activity like this one should be repeated again next year and our family will surely be present again. - Lagtapon Family, St. Dominic IV

I find the pilgrimage very fruitful and worth recommending. I admired your Logistics-very organized. And to think that you were monitoring a big group, everything ran smoothly. Kudos to your group! God Bless! - Mrs. Joyce Singson, Guest

It was a great experience. Besides that, it gave inspiration for spiritual growth and bonding. Thanks to the SLRP organizers. - Bro. Nguyen Khoa, Dehon Brothers

Last April 9 Visita Iglesia was the best pilgrimage that I had undertaken. Everything about it was perfect. Congratulations to Fr. Luke, the organizers, the parishioners of San Lorenzo for this once in a lifetime event. - Ms. Marissa Ampil, Tierra Bella

Worth remembering. Once in a lifetime pilgrimage with co-pastoral workers and parishioners. I felt the blessings and indulgences. – Ate Ruby Almazan, Education Commission/BRC

It was a tiring but an exhilarating experience. More than a spiritual exercise, it was a cultural trip bringing to mind the richness of our culture, as it show cased the beautiful architecture and artwork used by the Spaniards to catechize the Filipinos. Hopefully, the Visita Iglesia further deepened our faith and appreciation of Filipino art. When is the next one? - Leila Vicente

First of all, congratulations to all those who partook in this brilliant idea and most specially to the energetic and conscientious men and women who were truly inspired by the Holy Spirit to plan it so meticulously! While on the trip I can't help but think back to the Team who planned it all. You are truly God sent! It must have been very arduous to organize this endeavor but you pulled it off with flying colors. Thank you so much for this memorable trip. People like you have made it easier for all of us who joined in the Visita to exprience a deepening of our faith.
May you all be continously inspired and motivated to move all of the parishoners to a single commitment in finding HIM in all things! - Lydia Vicente

The Visita Iglesia held last April 9, 2011 was a very fulfilling experience for our family. It was our first time as a family to join a parish activity like this one, and we enjoyed it very much. It was a very well planned activity and the outcome was very systematic and well organized. We also witnessed and experienced how united the parishioners were. A successful activity like this one should be repeated next year and our family will surely be present again. -
Enalynn Lagtapon


Maganda! I have never been to so many churches. Marami nagsasabi na sana maulit. And for 500 pesos it was cheap! - Buddy Lising

It was an exercise on patience, humility & community. People really took care of each other. -
Fr. Luke

Bravo! Job well done. Thank you so much to the team. That was so well organized. We look forward for the one next year. God bless you all. - Vic Vianzon

... Truly the gift of the Holy Spirit sustained us all the way. I was a witness that day to the Lord's promise that when two or three are gathered in His name, there He is in the midst of them. VIVA SLRP and kudos to our shepherd Fr. Luke for a job well done! - Dr. Rose Garcia