SLRP Youth Formation: This is the Day! 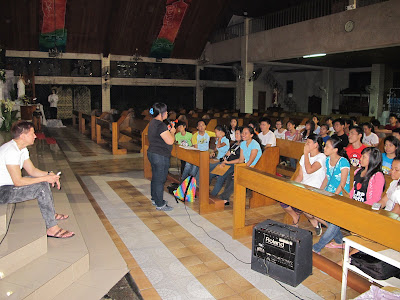 By Alisa Ortonio, 15
YF Participant
I set foot in Lucban, Quezon for the first time last June 4 2011. It was truly a day to remember. As I attended mass weeks before the said date, Fr. Luke gave several reminders about the activity before he ended the mass. At first, I honestly didn’t mind what he was saying but when he mentioned that there will be an upcoming youth event which was the yearly “youth camp”, I was all ears. It caught my attention because I really wanted to join the youth camp since I started serving the parish years ago. I wasn’t able to join the previous youth camps because my friends from MAS told me that I could only join the camp when I turned 15 years. Now that I was old enough, I didn’t hesitate to sign up for it. I was hyped up and I just couldn’t wait for the event to happen.

The other youth in the Parish Youth Ministry were very sociable and fun to be with. They gave me a warm welcome as I joined the group. Unfortunately, some of the youth who signed up for the camp could not afford to pay the fee. So, we thought of ways to raise funds for the group - we offered car wash services, collected recyclables and solicited cash donations from people who were kind enough to donate. Everything went well because we did everything together, with the guidance and help of our dear coordinator, Ate Cora.

The night before we left for Lucban, Father Luke gave his talk. It really inspired me to be more realistic in my view of life. I learned a lot from his talk which I know will help me now and in the future. As he was finishing his talk, my heart was pounding knowing that I only had a few more hours to wait before we would leave for Lucban.

The next day we started the trip by praying the rosary. We stopped at a gasoline station for bathroom break and to buy whatever provisions we needed. We played games inside the bus and it really made me laugh so hard.

Kamay ni Hesus was so beautiful and solemn. I was amazed when I saw the enormous statue of Jesus Christ. To appreciate the place more, we had to climb up the long and steep stairs while doing the Stations of the Cross. It took us some time before we reached the top. The weather kept changing but we didn’t let it stop us from what we wanted to achieve, which was to reach the statue at the top of the hill. When we got to the top, I thought that it was all worth it because the view was very rewarding.

After being soaked in the rain, everyone was so excited to swim so we went straight to the resort where we were to spend the rest of the day. Most of us were eager to swim as soon as we saw the tempting pools. The water was freezing cold! We also had games that made us laugh non-stop because of the jokers in the group. We swam a little bit more then went home and ended the day with a prayer with Fr. Luke.

June 4 2011 was truly an extraordinary day for me and for all the rest who participated in the event. We were given the chance to make our friendship stronger and to build new ones as well. It made my first ever youth camp memorable. For me, it was one of the best days of Summer 2011. I really learned a lot from the experience. I am thankful because this experience helped me grow more as an individual. I learned to be more patient, humble and sociable. Most importantly I learned that if I do everything with my faith in God, anything is possible.