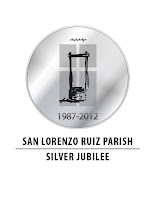 With the start of the Advent season, the parish formally began its preparations for its Silver Jubilee anniversary this coming September 2012 with the launching of the Slogan-writing contest. The slogan will be the unifying theme for all activities related to the jubilee year.
Over 50 entries were received by the organizers and the committee had a difficult time assessing the most appropriate slogan that captures the mission and vision for the parish.
The announcement of the final slogan was made at the Christmas Eve mass. Although there was no single entry selected, the committee decided to award those who participated, in recognition of their efforts, as many of the entries were submitted anonymously. They were given certificates of appreciation during the same mass.
The committee finally came up with the theme for our jubilee year helped greatly by all the entries received. It goes:
San Lorenzo Ruiz: Sanlibong buhay...minsa'y ini-alay, hangaring isabuhay!
Posted by Web Admin at 6:19 AM