True to its liturgical mandate, this year’s Holy Week celebrations were austere and simple compared to the past. Beginning with the Palm Sunday activities all the way to the Easter Vigil and Easter Sunday liturgies, the emphasis was focused on the participation of everyone, especially the laity in the various celebrations, rituals and processions.

Palm Sunday began with the dawn procession at 4:30AM around the five areas of the parish with the blessing of the kubols in Tierra Verde 1, St. Dominic 4, UP Professors Subd, Dona Faustina Village 1 and Cruz Compound. The procession then ended at the church in time for the 6:00AM mass.

From Holy Monday to Wednesday, a simple mass in the morning and the afternoon was celebrated. The stations of the cross were observed every afternoon with the newly installed stained glass in the Formation Center providing the guide for the faithful..

On Holy Thursday, the beginning of the Paschal Triduum, the Chrism mass was held at the Cathedral Shrine of the Good Shepherd in Fairview where the oils of anointing (of the sick) and chrism (for the sacrament of Confirmation) are distributed to all parishes after these were blessed by the bishop. Then the parish workers gathered for agape in the late morning after their return from the Chrism mass. It is the only day in the Triduum where the faithful are allowed to eat their full meal  before the final fast of Good Friday.

In the afternoon of Holy Thursday, the Washing of the Feet of the Disciples was re-enacted by Father JB and twelve parish workers (acting as disciples) who each brought a friend, relative, acquaintance or worker in his/her employ whose feet they washed too.

This year the disciples were represented by twelve new members of the different ministries.

After the mass, there was the solemn procession of Blessed Sacrament within the confines of the church after which it was reposed for vigil up to 12 midnight at the Altar of Repose. Different ministries, the religious and the laity took turns Accompanying the reposed Christ in vigil in memorial of his passion.

The next day, Good Friday, saw the community gather for the Seven Last Words, a reflection on Jesus’ last statements as He hang on the Cross that fateful day. This year, it was the religious in the parish who shared their personal reflections on Jesus' last words.

Two representatives each from the Sisters Adorers of the Blood of Christ (Sis Eliza Rao and Sis Linlee Vios) and the Missionary Sisters of Queen of the Apostles (Novices Mildred C. Dura and Merilyn L. Amancio) and one from the Daughters of Mary Sis Violy Domingo, a seminarian from the Priests of the Sacred Heart Bro Chris Alburo  and the Sacristan Mayor of our parish Norman Dequia gave their sharing.

The Good Friday mass service commenced immediately after, in somber and solemn reverence. Despite the sweltering heat, the faithful came and filled up the church to be one and remember Christ’s great sacrifice for us. There was the dramatization of the Gospel led by the LECOM and friends in church service.

After which followed the rituals for the veneration of the cross where the crucified Christ was slowly unveiled before the traditional kissing of the dead Christ.

As the afternoon wore on and with dusk approaching, the procession of the Santo Entierro wend its way through all the areas of the parish and ended with the evening Vigil at the main altar of the church.

In the evening of the next day, Black Saturday, the Great Easter Vigil, the climax and summit of the Catholic faith, was held in simple yet meaningful ceremony in conformance with the liturgical guidelines. There was the blessing of the fire, the lighting of the Paschal Candle before the entrance procession.

Then followed the Blessing of the Water and the Renewal of Baptismal promises before the long readings. This was the first time in a long time that all the liturgical readings ( 7 readings from the Old Testament, 1 Epistle and the Gospel) were read and in their full texts. The readings of the Easter Vigil depicts the whole of Salvation History, from the creation of the world to Abraham being chosen to be the father of God’s nation to the Exodus to the Babylonian exile to God’s promise of the Redeemer and His eventual passion, death and triumphant resurrection. This time there was no lighted fire falling into a pile of wood and charcoal, there were no more garish decorations, there were no fireworks and there was no dancing during the Alleluia. 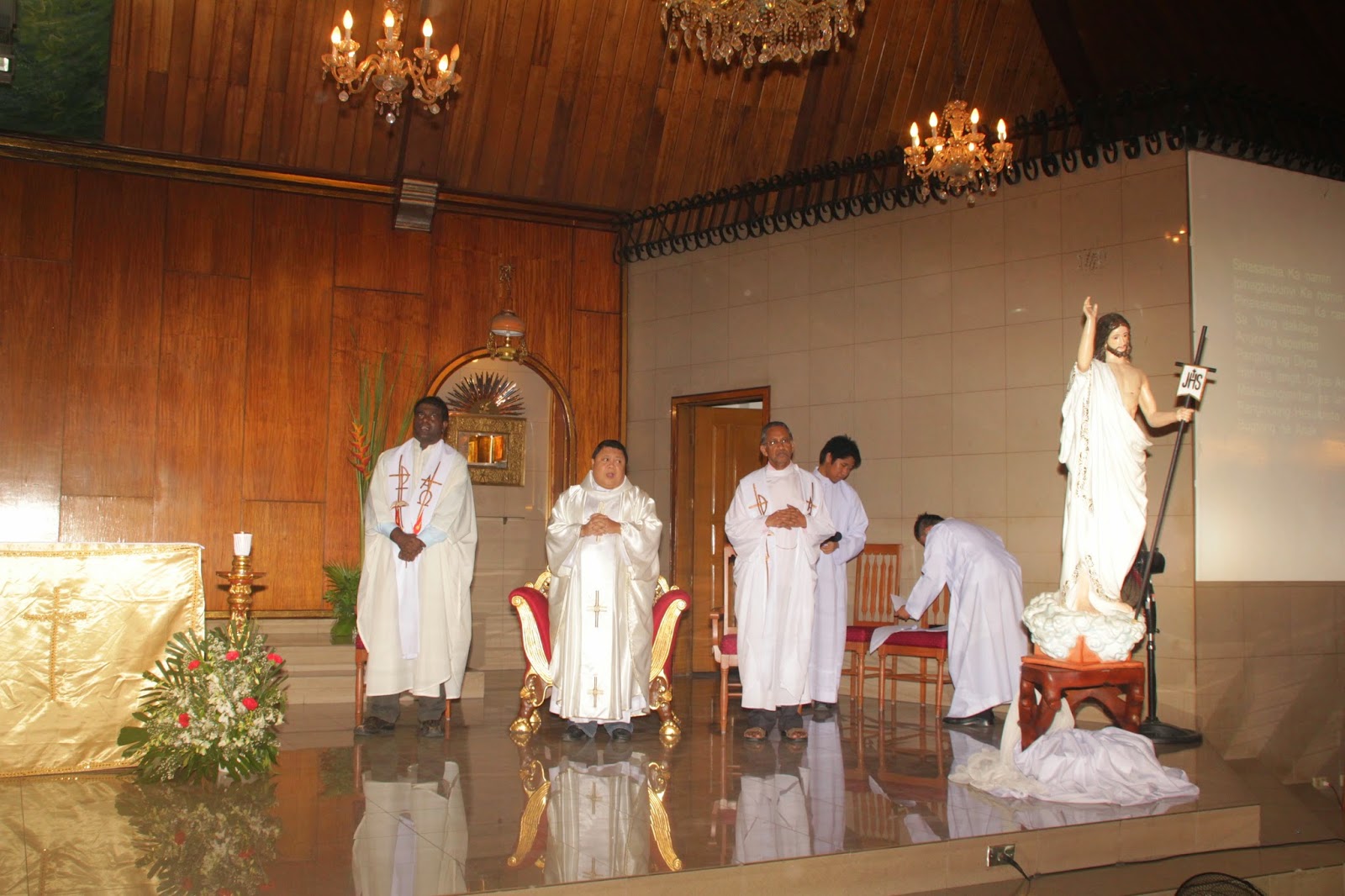 t was just a simple confetti shower and turning on of all lights in the church that symbolized the happy feeling of the resurrection.

Early on Easter Sunday, there was the traditional Salubong with the risen Christ brought to church by the menfolk coming from St. Dominic 4 while the Grieving Mary (Mater Dolorosa) was brought by the womenfolk coming from the Adorers’ Chapel in Tierra Verde 2. An Easter egg hunt for children (and adults feeling like children) was held at the church grounds after the 8:00AM mass.

Well this is the first Lenten and Holy Week activities done under the new Litrugical guidelines. It definitely was more solemn and meaningful reflection on Christ’s  passion.
Posted by SLRP-QC Admin at 1:47 PM