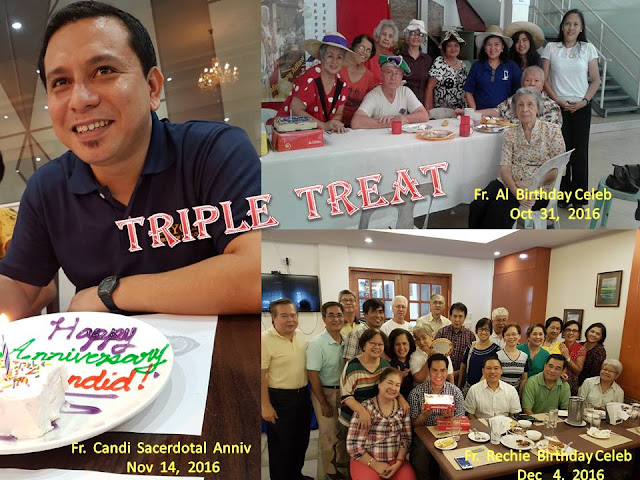 In a short span of a little over a month, the parish had a triple treat celebration. The three Dehonian priests of the Sacred Heart of Jesus, each celebrated a milestone in their lives as they complete their first semester as pastoral caretakers of SLRP.

The first event was our parish priest, Father Al's 64th birthday which was last October 31. According to Father Al he feels something new as he jokingly avers that vthis is the first time he's celebrating his 64th natal day!

This was followed two weeks later with Fr. Candi's 2nd year Sacerdotal anniversary to the priesthood. As a trivia, Fr. Candi was ordained  here in the parish two years previous.

Last was Fr. Rechie, who celebrated his birthday last December 4, a Sunday. For his birthday, he thanked his well wishers who attended the masses he celebrated last weekend. He had a simple wish for his birthday for a simple guitar for use by the religious sisters who attend daily masses. His wish was quickly granted. On behalf of the parishioners of SLRP, the PPC Chairperson Kuya Peter Tamayo read a prayer of felicitation and intercession for Fr. Rechie's continued growth in his vocation and that he be granted good health of mind and body. Fr. Rechie, on the other hand, asked the parishioners pray for them (priests) and the parish so that both may grow in their relationship with each other and with God.

Each was treated in a simple repast.

Click this link to view the Birthday Prayer for Fr. Rechie