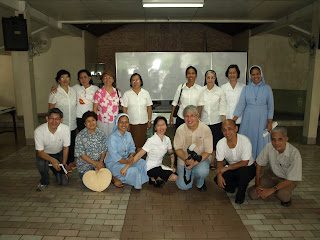 The Catechetical Ministry (CM) is a much sought after and the most essential program of the Catholic Church. Our own San Lorenzo Ruiz Parish (SLRP) has had this ministry since its founding in 1987. With the unwavering support of all past parish priests, and the full support of the sisters of the Daughters of Mary congregation, it has continued to thrive in its work of taking care of the spiritual welfare of its followers through catechism.

The parish priests who initially gave their support to make it an official ministry were Fathers Thomas Nechikat, Larry Toledo and Rolando Petronio. They were the first to handle a group of catechists coming from seminaries and congregations of religious groups within the vicinity of Barangay Culiat. Members of the Legion of Mary, with Ate Evelyn De Guia, also contributed in teaching catechism to the Culiat High School and Elementary students. Among those involved in its early days were the Agustinian seminarians, Vincentian seminarians, as well as those from the Parish of Our Lady of Consolation, together with the sisters from the Daughters of Mary.

In 1997, Sister Lolit Franco recruited another set of volunteer catechists who were the school-based catechists of SLRP. They were trained through formation seminars under the supervision and facilitation of then Parish Priest Reverend Father Percival de Vera and Sister Magdalena of the Mission Catechism of Saint Theresa. They also attended stay-in seminars at San Carlos Seminary during the time SLRP was still under the Archdiocese of Manila.

In 2005, the Diocese of Novaliches was established and SLRP fell under its jurisdiction. Father Emmanuel Del Rosario, the parish priest at that time, gave his wholehearted support to the ministry which boosted the morale of the catechists. However, Culiat High School was the only school that remained under the area covered by SLRP and the catechists continued to teach the students regularly.

Today the CM is in full force fulfilling its mandate of evangelization. Pre-Baptism and Confrmation seminars are regularly conducted for those who have yet to receive these sacraments. Catechism is needed in order to receive the sacraments of Reconciliation and the Holy Eucharist, while Christian Doctrine and Pre-Cana seminars are given to those who will receive the Sacrament of Matrimony. A series of rigid studies on the doctrines of the Catholic Church is also required for converts from other religions.

The Ministry continues its activities and programs and has recently given birth to a Sunday School for children aged 6 to 14 years old. It is also planning for a Sunday School for Toddlers. With the graces and blessings of God, the ministry will prosper and progress in spreading the Good News, the message of Christ to the Apostles, which was handed down through generations.
Posted by Team SBS at 5:54 PM