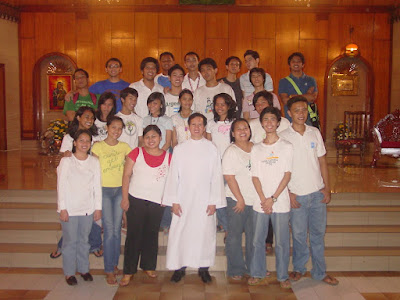 That is the Youth of San Lorenzo Ruiz Parish today. After a long hiatus, it was only in 2007 that the idea of reliving the Parish Youth Ministry (PYM) was formed. It was not easy. It was like starting all over again. But with the grace of God, a core group was formed from the members of the old PYM. With several activities lined up for Youth Ministry by its appointed officers, it is truly worth giving up time for gimmick, computer games and others.

Driven by the theme taken from the PYM Youth Camp: Youth-Unite, Serve, and Encourage, this year’s appointed officers are working for the realizaton of the ministry’s goal: uniting the youth through service to the Lord Jesus Christ and the church, and evangelizing others like themselves. With the help of Father Luke Dobles, the Parish Pastoral Council and Kuya Eric Castillo, the ministry has been continually enthusiastic and hopeful in encouraging the youth to participate in church activities for personal, spiritual, and social development.

SLRP had its first Youth Congress in November 30, 2007. During the Holy Week in 2008, the PYM presented real-life situations through a mini-drama during the Stations of the Cross. The PYM also organized a Youth Camp from April 18 to 20, 2008 in the Servants of Charity Seminary. The PYM was invited by Radio Veritas for an interview on August 25, 2008 in relation to the 21st Founding Anniversary of San Lorenzo Ruiz Parish. They also presented a theatrical interpretaton on the life and martyrdom of San Lorenzo Ruiz back-to-back with Fusion ‘08, a fund-raising concert of the Music Ministry together with the PYM on September 26, 2008.

Fund-raising activities are on-going to support the ministry’s programs for the holistic development of the youth. Regular meetings are held every first Friday of the month. The Youth Mass is held every 2nd Sunday of the month at 6:30pm.